The Aftermath of the Gulf Oil Spill 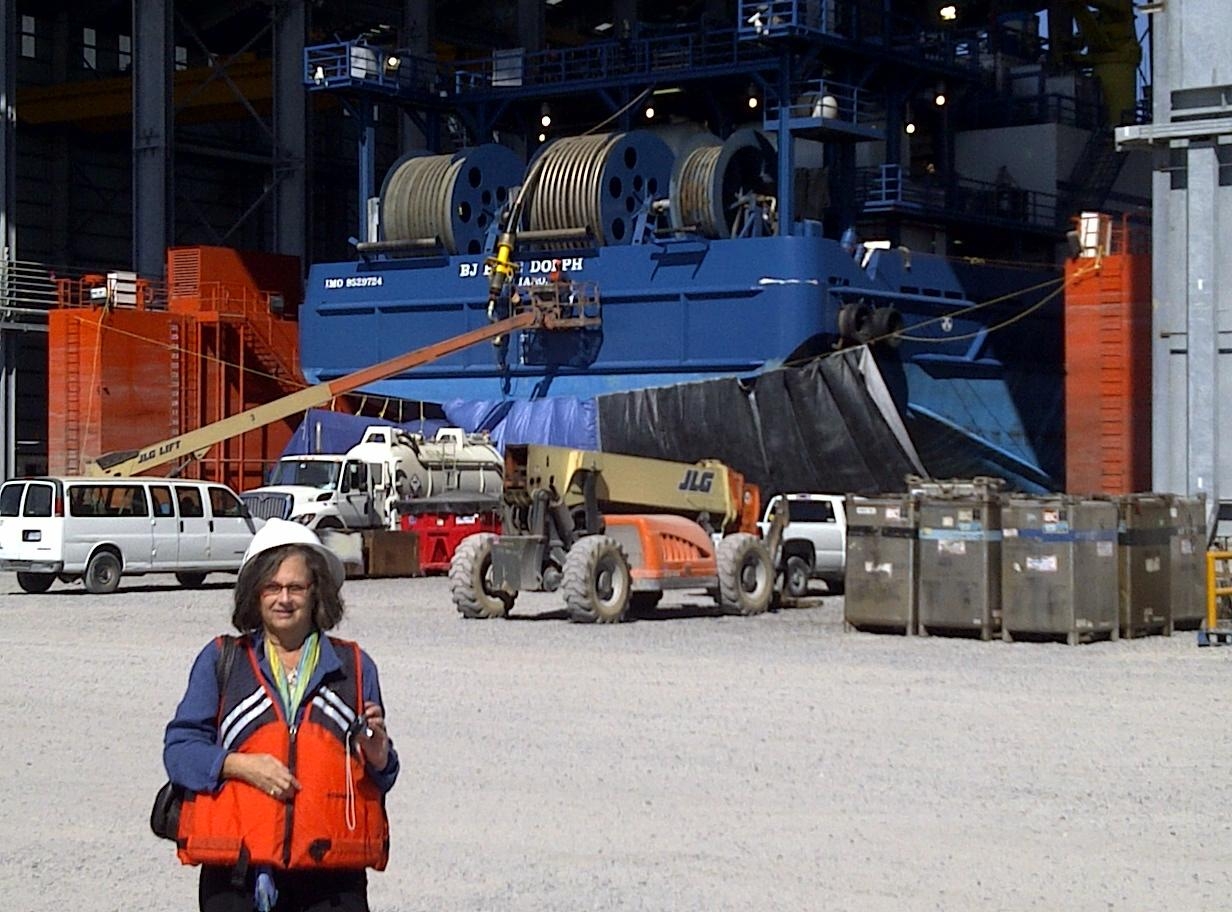 Dale Sandler in Port Fourchon, Louisiana, in front of the boat that stopped the oil spill.

The explosion of the Deepwater Horizon oil rig last April and the months-long struggle to stanch the flow of oil gushing into the Gulf of Mexico dominated news reports until the well was capped in August. The disaster no longer commanded ‘top-story’ status and faded from public consciousness.

Not so for Dale Sandler, PhD ’79, chief of the Epidemiology Branch in the Division of Intramural Research at the National Institute of Environmental Health Sciences (NIEHS), who was tapped last June to lead a multi-million dollar federal study examining the long-term health effects of the oil spill on cleanup crews. Their work exposed them to crude and weathered oil, burning oil and oil dispersants that contain a range of known and suspected toxins.

It’s a topic for which there is scant data.

“With the exception of Spain’s Prestige [an oil tanker that sank in 2002, releasing oil that polluted thousands of miles of coastline] spill, very little has been done in terms of looking at long-term health consequences [of oil spills],” Sandler said. “Of something like 38 supertanker spills, 8 had health studies and most of those were studies of acute health effects with limited follow-up.”

The initial study funding is for 10 years of follow-up.

Sandler’s involvement with the Gulf Long-term Follow-up (GuLF) Study began last June when NIH director Francis Collins asked the NIEHS to suggest ways the NIH might respond to the potential environmental and health concerns stemming from worker and community exposures to leaking oil in the Gulf. Sandler got the assignment.

“I thought, Well, it’s a little bit late for a focus on the acute effects," she said. “We should think about long-term health because nobody’s ever done that.”

The next day Sandler was named to head the study. It’s a position she is well-suited for.

Sandler is the principal investigator of The Sister Study, a prospective study of 50,000 sisters of women who have had breast cancer, designed to understand the environment’s role in the disease. She also partnered with the National Cancer Institute to develop a prospective study to track the health of licensed pesticide applicators, their spouses and children, a study that has been active since 1993.

“My career has not been the traditional PhD epidemiology career where you have one topic of interest and focus on it in greater and greater depth or in different populations,” Sandler said. “I’m interested in lots of different things.”

The GuLF Study will initially target all cleanup workers, but workers from the four most affected states—Louisiana, Mississippi, Alabama and Florida—will be studied more intensively.

The starting point for the massive study is a list of approximately 130,000 people—compiled from separate lists provided by the National Guard, the Coast Guard, BP, health departments and others—who took some type of safety training in connection with the oil spill cleanup, although they may not have participated directly in the cleanup efforts.

“It’s a cohort that is not easily described because it includes lots of people from different walks of life who took part in some aspects of the oil spill cleanup, from BP workers who regularly go out and clean up spills to out-of-work oyster fishermen who got hired on to clean up,” Sandler said.

Researchers expect to contact 86,000 people to enroll a cohort of 55,000 who agree to a phone interview with study staff about their current health and their health and work experience during the oil spill cleanup.

A sub-group of 24,000 will be selected from the larger cohort for home visits and collection of biological samples (blood, urine, hair, toenail clippings), environmental samples (house dust), body measurements, blood pressure readings and pulmonary function testing. While the full cohort of 55,000 will be followed over time through linkage to cancer registries and vital statistics, the sub-group will be contacted every two years for telephone interviews to update participants’ health status.

Finally, a group of 5,000 within the 24,000-member sub-cohort will receive more in-depth clinical assessments, including neurological and immune function tests, as well as more comprehensive pulmonary function tests. Researchers expect to begin interviews in mid-March, and the full study will launch in April.

The hope is that the study will yield information about any long-term effects of oil-spill exposures to both inform future responses in the event of a similar disaster and identify potential health care needs of exposed workers, Sandler said. Such information should be of use to communities, health departments and others affected by this and future environmental disasters.

During the cleanup, frequent complaints from workers included skin rashes, blurry vision, itchy and watery eyes, runny nose and heat-related complaints, Sandler said. Based on the limited information from other studies on the health effects of oil spills, she said that potential outcomes include respiratory, neurological and immune response problems. While previous studies have found increased rates of clinical respiratory problems such as asthma, other outcomes may be more subtle and include changes in biomarkers of genotoxicity.

Sandler also expects to see a common post-disaster increase in alcoholism, smoking, mental health disorders such as depression and anxiety, and stress-related illnesses with non-specific symptoms. Stress-related outcomes are expected in workers, as well as the community in general, as many of the workers were from the Gulf region and took oil spill clean-up jobs because other jobs such as fishing were no longer possible. For example, she said she hears regularly from people who call the GuLF Study hotline complaining of a combination of headaches, rashes and digestive problems, “things that are hard to link to specific diseases or exposures, but are certainly related to stress and could be related to some of the clean-up experiences.”

Unlike other epidemiological studies that Sander has led, the GuLF Study has a public health component—being developed with local health departments and social service organizations—to connect cohort members with needed health services to address problems identified by researchers in home visits.

“Some of what we find during the home visits may have nothing to do with oil,” Sandler said. “This is a medically underserved community, and we expect to find people with problems such as untreated diabetes and hypertension. A service that we can provide is to get them screened and connected to health care.”  –Jackie Powder