Thomas Frieden "What TB Can Teach Us" 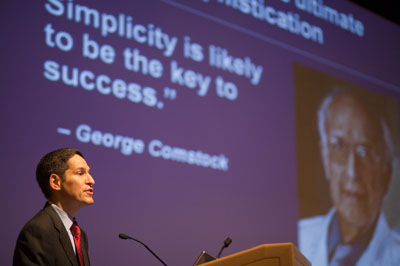 The words guided legendary epidemiologist and TB researcher George W. Comstock and have been invaluable to Thomas R. Frieden, MD, MPH, director of the U.S. Centers for Disease Control and Prevention and long-time admirer and colleague of Dr. Comstock.

They were particularly instructive as he led a campaign in New York City to control a TB epidemic from 1992 to 1996, says Frieden, who delivered the Fifth Annual George W. Comstock Lecture in TB Research on December 6 at the Bloomberg School, “What TB Can Teach Us.”

Frieden recalled that in New York, the TB death rate had declined to “almost nil,” then began to rise as a result of the HIV epidemic, increasing homelessness and the failure of TB treatment programs. The public health crisis brought economic losses, enormous hospital costs and even caused medical school graduates to bypass New York for their residencies.

Frieden, who later would serve as commissioner of the New York City Health Department from 2001 to 2009, put into place an intensive treatment program, including Directly Observed Therapy (DOT), in which a health care worker watches the patient swallow each medication dose. The successful TB control campaign also relied on meticulous surveillance data and rigorous accountability standards to track outcomes.

“Persistence is so important in TB control,” says Frieden, and, he adds, having an understanding of a basic truth of human nature.

“Hippocrates was right. Patients lie,” he says. “About a third of patients don’t take medications as prescribed and a third don’t take them at all. You can either delude yourself and think that patients are taking their medications or assume not. In TB control, it’s a simple model—if we see people take their meds, we believe they took their meds.”

In the global battle against TB, Frieden said that the good news is “progress is possible,” noting that 700,000 lives are saved each year because of better treatment.

He also pointed to some serious gaps in the battle against TB: a need for new diagnostic tools, shorter drug regimens, better drugs for children and people who are HIV positive, and especially better ways to identify and treat people with TB infection in order to prevent progression to TB disease.

Frieden emphasized the need for more TB studies to keep current with changing characteristics of the disease—wisdom passed down by Comstock, MD, DrPH, MPH, a Bloomberg School Professor Emeritus who died in 2007.

“One thing I learned from George Comstock is that past is not necessarily prologue,” he said. “We don’t know, perhaps, some changes in the nature of the spread of the bacteria, of the host response or even of the bacterium evolving over time. Knowledge is there to be learned, but also challenged with questions and built upon.”

Frieden says that the successes of the TB control model—based on standardization of treatment—can easily be applied to other public health challenges, such as the treatment of high blood pressure.

“One of the terrible mistakes we make in hypertension control is not standardizing,” he says. “Once you do that it drives the cost down and the quality up. TB control shows that it’s possible to treat millions of people at low cost and with high quality.”  Jackie Powder