Just how many germs are you spreading with a handshake? 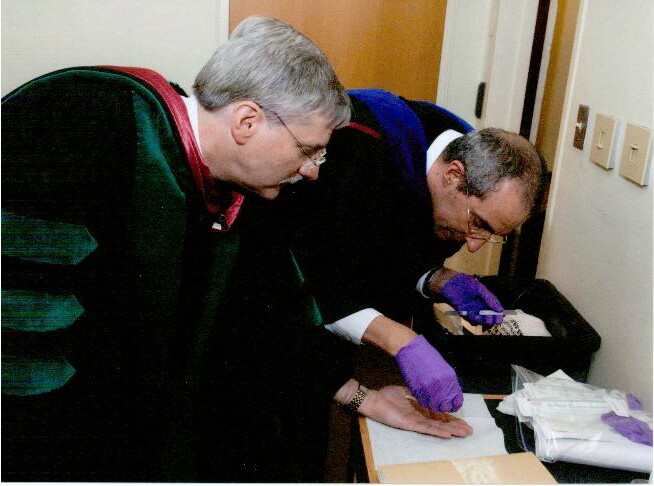 Graduations are a celebration of achievement and growth, but could all the pomp and circumstance increase your risk of exposure to harmful bacteria? A team of researchers from the Johns Hopkins Bloomberg School of Public Health examined the risk of acquiring pathogenic bacteria such as Staphylococcus aureus and methicillin-resistant Staphylococcus aureus (MRSA) through shaking hands at graduation ceremonies across Maryland. A handshake, a short ritual in which two people grasp one of each other's hands, dates back as far as the 5th century BCE. This gesture has become ingrained in modern society as a standard greeting and part of the traditional graduation ceremony. Researchers swabbed participants’ hands before and immediately following graduation to identify any pathogenic bacteria and found 93 percent of samples contained nonpathogenic bacteria. Their results are featured in the June 2011 issue of the Journal of School Nursing.

“A single handshake offers only a small risk of acquiring harmful bacteria,” said David Bishai, MD, PhD, MPH, professor with the Bloomberg School’s Department of Population, Family and Reproductive Health. “Our study indicates when shaking hands, the rate of hand contamination among graduating students to be 100 times lower than the 17 percent rate observed among health workers caring for patients known to be colonized with MRSA. Reasons for the lower rate of contamination at graduations include the much briefer and less-extensive contact in a handshake and what we presume is a lower prevalence of MRSA in graduating students compared to hospital patients. Another reason may be that subsequent handshakes could remove pathogens acquired in an earlier handshake.”

Researchers conducted a repeated measures observational study among select elementary, secondary and post-secondary school graduations in May of 2008. They measured bacteriological culture from each hand of school officials immediately after the application of commercial hand sanitizer and immediately before a graduation ceremony. In addition, researchers measured bacteriological culture of each hand immediately after the ceremony. Pregraduation and postgraduation samples were collected from the left and right hands of each participant. One of 25 pregraduation bacterial isolates was identified as a pathogen, specifically methicillin-sensitive Staphylococcus aureus and was cultured from a right hand specimen. Of the postgraduation specimens, 96 percent grew bacterial from the enrichment broth. All samples from left hands and 93 percent of samples from right hands showed bacteria after graduation.

Bishai got the idea for the project after years of attending Bloomberg School’s graduations and wondering what would be growing on the dean’s hand at the end of the day.  His interest was piqued when he learned than some officials at Johns Hopkins graduations were sneaking squirts of hand sanitizer behind the podium.  When he raised the issue in a class full of Hopkins undergrads in his Health Economics class, six volunteered as research assistants to help collect samples that spring.

Bishai goes on to say, “Based on the evidence from this study, the probability of acquiring bacterial pathogens during handshaking could be lower than is commonly perceived by the general public. Individuals who already engage in hand hygiene after handshaking should not be dissuaded from this practice. With a lower bound estimate of one bacterial pathogen acquired in 5,209 handshakes, the study offers the politicians, preachers, principals, deans and even amateur hand shakers some reassurance that shaking hands with strangers is not as defiling as some might think.”