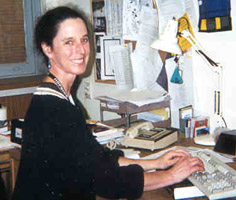 Alison Geyh, PhD, associate professor at the Johns Hopkins Bloomberg School of Public Health, passed away February 20, at age 52, after a lengthy battle with cancer.

Geyh joined the Department of Environmental Health Sciences in 2000 and built an international reputation with her work on air pollution, where she applied her skills as a chemist to study the impact of air pollution on health. Geyh was widely known for her research on the health of cleanup workers at the site of the September 11, 2001, World Trade Center atttack. She was a beloved faculty member at Hopkins and a treasured colleague, mentor and friend to many in the scientific community around the world.  Family and friends know her for her passions for cycling, cooking, art and dance, and for her deep commitment to research, teaching and mentoring.

Geyh was raised in Anaheim, Calif., where as a teenager she danced as a "Cinderella Dancer" in the Disneyland Electric Light Parade. In 1976, she moved to New York City where she performed ballet professionally for a number of years before entering Columbia University. There she earned her bachelor’s degree in Chemistry and met the love of her life, Edward Geyh. They married in 1986 and moved to Massachusetts where she earned her doctorate at Brandeis University and did post-doctoral work at Harvard.

Geyh will be remembered for her fierce commitment to her work, her grace and athleticism, her dignity and humility, her remarkable ability to mobilize people to get things done, her unwavering sense of ethics and her deep love for her family, colleagues, students and friends. She is survived by her husband Edward, her sister Christine Daniel and her partner Cecily Peterson, her father Richard Daniel and his wife Jinny, Edward's sister Paula Geyh, and her two kitties Pixie and Jackie.

A gathering of her friends and family will be held on Saturday, February 26, at the Mount Washington Conference Center in the Octagon Room (5801 Smith Ave., Baltimore, MD 21209) from 1 to 4 p.m. There will be a reflection about Alison's life starting at 1:30 p.m.