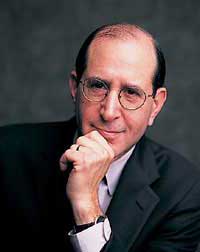 Dean Emeritus Alfred Sommer’s transformative work on the lifesaving powers of vitamin A made him a public health hero and brought him international recognition. But before the accolades came pouring in, he had to sell his new discoveries to a skeptical public health establishment.

As the featured speaker at the annual Dr. Leroy E. Burney Lecture on April 14, Sommer, MD, MHS’ 73,  offered a behind-the-scenes glimpse of the bulldog-like tenacity and powers of persuasion that he relied on—and is still using in his current work—to convince medical journal editors, WHO officials and other gatekeepers of the mantle of legitimacy in the public health world.

In his talk, “Paradigm Shifts and the Power of Magical Thinking,” Sommer recounted some of his clashes with the medical establishment and offered some tips to Bloomberg School students in challenging the public health status quo.

“When we think about what we like to instill in all of our graduates as they go forth in the world to do battle, we tell them to try to accumulate evidence, and when that evidence reaches a tipping point and there’s enough that would appear to change the paradigm, to embrace it and act upon it,” Sommer said.

“It’s not always easy. Why?” he asked. “Because there are lots of vested interests and people of small minds and traditional thinking who will oppose changes in knowledge and practice, and engage in wild forays into magical thinking.”

Magical thinking, as defined by Sommer, is the determination to cling to outdated methods and ideas in the face of overwhelming evidence to the contrary.

To illustrate how magical thinking sometimes intrudes on novel ideas, Sommer cited the 1985 Baltimore Eye Survey. The project was the first epidemiological, community-based study of vision in a large American city, and led to a better understanding of the role of intra-ocular pressure in the diagnosis of class="msoIns" glaucoma. Under conventional diagnostic methods, an eye pressure measurement 21 or below was the most reliable indicator of the absence of glaucoma. However, the Baltimore survey results showed that class="msoIns" half the people with glaucoma have pressures in that supposedly “normal” range.

“So, a cut-off of 21, with its magical powers, really makes no sense whatsoever,” Sommer said, “and despite years of papers and supportive editorials, and even the official backing of the American Academy of Ophthalmology, we are still fighting this battle.”

Magical thinking also emerged as a response to multiple studies in Indonesia, India and Bangladesh conducted by School faculty on the lifesaving benefits of giving vitamin A to infants during the first few days of life.

Despite repeated results that showed a 20 percent reduction in infant mortality, Sommer said that a WHO/UNICEF-sponsored review of the studies by an Indian scientist, who didn’t actually consider the issue that the data addressed, helped to undermine the acceptance of appropriate health policy supported by that research.

“We’re not going to give up on this issue,” he said.

Sommer has found that an effective way to overcome the wall of magical thinking is to discuss discoveries with key audiences.

“To reverse magical thinking, you spend a lot of time meeting with different audiences: scientists, politicians, pediatricians,” he said. “You have to accumulate data, you have to seek scientific consensus, even if some individuals have vested interests and their heads in the sand, but that’s what we seek to do.”
Jackie Powder