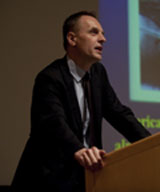 “The world is facing intensely complex problems that require complex solutions,” said Richard Horton, editor-in-chief of The Lancet, as he invoked the audience of scientists and students to change the world. “The only institution that can do that with the rigor necessary,” he said, “is the university.”

In a talk that took place at the Johns Hopkins Bloomberg School of Public Health on May 12 as part of the Global Health Leaders Forum, the erudite editor drew on ideas put forth by Friedrich Engels, Edward Said and John Ryle to make points about the responsibility of doctors and scientists to engage in social issues and to lead policy change. Paraphrasing Said, he called on the students in the audience to dissent, stir up trouble, ask embarrassing questions, live lives of risk and concern themselves with social change.

As editor of The Lancet, one of the world’s most prestigious medical journals, Horton questions the usefulness of science that lives apart from the world, independent and steeped in the mind; he chooses instead to stand behind science that catalyzes change. Having made several editorial decisions to engage and provoke, he acknowledged the risk of involvement: “When journals step across the line, we incur the wrath of our readers.”

In 2003, The Lancet published a child survival series that laid out a plan for using indicators to monitor progress in maternal and child health. The series was co-authored by the Bloomberg School’s Robert Black, MD, MPH, professor and chair of the Department of International Health.

Some of Horton’s more controversial decisions include the publication in The Lancet of two Bloomberg School–authored papers that presented estimates of the death toll of Iraqi citizens after the U.S.-led invasion in 2003. The Iraq mortality papers received intense criticism from political figures, as well as from some members of the scientific community, and Horton said that some believed The Lancet’s reputation was damaged amid the debate. “They were the right decisions to publish these two papers,” he said.

More recently, the journal published a series of papers examining the health of Palestinians in occupied Gaza and the West Bank. “Something is going very badly wrong in the territory at the moment,” he said, citing under-5 mortality, stunting and death rates, and attributing the rates to Israeli occupation. When the series was published in March, the spokesman for Israel’s prime minister labeled them “propaganda in the guise of a medical report”—Horton was cheered by his colleagues’ delight at having provoked a reaction.

Criticizing its role in global health issues, Horton lambasted the WHO for its refusal to confront human rights abuses occurring within countries; abuses taking place within a country are intragovernmental issues and therefore go against the WHO’s mandate to act intergovernmentally. “It’s a recipe for passivity,” he said. “Absolutely ridiculous. An excuse for inaction.”

Having taken on contentious issues such as Iraq mortality and health in Gaza and the West Bank, Horton spoke about goals for further action, for both The Lancet and the medical community: the chronic disease burden worldwide, the invisibility of mental health in the global agenda, and climate change.

In closing, he repeated his first question: Can science and scientists change the world? “Yes they can, they must, and you have on many occasions,” he said.

The Global Health Leaders Forum is a speakers' series that brings several global health leaders to campus each year. Their speeches examine a wide range of topics pertinent to global health, and they share the secrets of their success in the field.