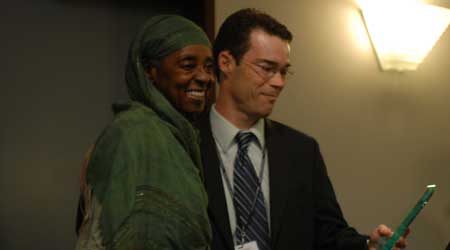 On August 31, the Center for Injury Research and Policy at the Johns Hopkins Bloomberg School of Public Health will honor the late Leon Faruq and the Safe Streets Program of East Baltimore with a Community Hero Award in recognition of Mr. Faruq’s exceptional leadership as the Director of the Baltimore Safe Streets Program. Noni Faruq, acting site director of Safe Streets, will be accepting the award on her late husband’s behalf. Mr. Faruq died in June while being treated for kidney disease.

Daniel Webster, ScD, associate professor with the Injury Center and co-director of the Center for the Prevention of Youth Violence, will present Ms. Faruq with the award. Dr. Webster is the principal investigator on research evaluating the impact of Safe Streets on homicides and nonfatal shootings as well as on youths’ attitudes about using guns to settle grievances. An interim evaluation released in early 2009 showed a significant reduction in homicides in the East Baltimore neighborhood of McElderry Park soon after the program was implemented there. The program’s street outreach workers will discuss what they do to prevent shootings and Dr. Webster will present additional findings during the award ceremony.

In 2001 Mr. Faruq founded Respect Outreach Center, a nonprofit that worked with at-risk youth and ex-inmates. The Respect Outreach Center was later merged into Living Classrooms’ Safe Streets program, modeled after the successful program CeaseFire Chicago. Safe Streets is a public health program that includes five core components to reduce violence: the use of surveillance data to identify communities with high rates of youth gun violence, development of community coalitions, a visible campaign of non-tolerance to gun violence, direct outreach to high-risk youth, and conflict intervention and mediation.