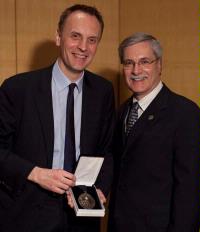 Michael J. Klag, MD, MPH, dean of the Johns Hopkins Bloomberg School of Public Health, has awarded the Dean’s Medal—the School’s highest honor—to Richard Horton, editor of the renowned medical journal The Lancet. The Dean’s Medal recognizes individuals who have made a significant contribution to the field of public health.

Horton was presented with the Dean’s Medal on May 12, 2009, at the Bloomberg School of Public Health in Baltimore, Md. As part of the ceremony, Horton presented the lecture, “Can Science and Scientists Change the World?” as part of the School’s Global Health Leaders Forum.

“As editor of The Lancet, Richard Horton has demonstrated great leadership by providing a voice for scientists and shining a spotlight on the global health challenges we are facing, particularly in the developing world,” said Klag. “It is a great privilege to award the Dean’s Medal to Richard.”

Horton, BSc, MB, FRCP, FMedSci, was born in London and qualified in medicine from the University of Birmingham in 1986. He completed his general medical training in Birmingham before moving to the liver unit at the Royal Free Hospital. In 1990, he joined The Lancet as an assistant editor and moved to New York as North American editor in 1993. Two years later he returned to the U.K. to become Editor-in-Chief.

Horton was the first president of the World Association of Medical Editors and is a past-president of the U.S. Council of Science Editors. He is an honorary professor at the London School of Hygiene and Tropical Medicine, University College London, and the University of Edinburgh. He is a Fellow of the Royal College of Physicians and a Founder Fellow of the U.K.’s Academy of Medical Sciences.

In 2005, he was a member of the working party and subsequently wrote the report for the Royal College of Physicians’ inquiry into the future of medical professionalism—Doctors in Society. Horton currently chairs the Royal College of Physicians’ Working Party on Physicians and the Pharmaceutical Industry; co-chairs a World Health Organization (WHO) Scientific Advisory Group on Clinical Trials Registration; is a Council Member of the Global Forum for Health Research; is a Board Member of the Health Metrics Network; sits on the External Reference Group for WHO’s Research Strategy; and is an External Advisory Board Member for the WHO European Region.

In 2004, The Lancet won the U.K.’s Medical Publication of the Year and, in 2007, Horton received the Edinburgh Medal for professional achievements judged to have made a significant contribution to the understanding of human health and wellbeing. In 2008, he was appointed a senior associate of The Nuffield Trust, a think tank for research and policy studies in health services. He has a strong interest in issues of global health. He has been a medical columnist for The Observer and writes regularly for the Times Literary Supplement and New York Review of Books. His book about controversies in modern medicine, Second Opinion, was published in 2003.