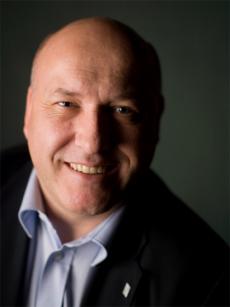 The Johns Hopkins Bloomberg School of Public Health has named Thomas Hartung, MD, PhD, director of the Center for Alternatives to Animal Testing (CAAT), the inaugural Doerenkamp-Zbinden Professor and Chair for Evidence-Based Toxicology. Hartung, a leader in the field of toxicology and an advocate for alternatives to animal testing, was officially installed as chair during a ceremony at the Bloomberg School on May 12.

The endowed chair was established by the Doerenkamp-Zbinden Foundation in honor of philanthropist Hildegard Doerenkamp and the late Gerhard Zbinden, a renowned toxicologist and professor. Created in 1982 to promote and reward “exceptional achievements in animal protection in biomedical research,” the foundation supports research to reduce, replace and refine animal experimentation.

“Thomas Hartung is an outstanding researcher who has made significant contributions to the field of evidence-based toxicology, and in addition to leading CAAT will work to establish a laboratory to lead the way in developing alternative methods to animal testing in the U.S.,” said Michael J. Klag, MD, MPH, dean of the Bloomberg School of Public Health. “I would like to thank the Doerenkamp-Zbinden Foundation for its commitment to our school and to advancing toxicology research.”

Hartung came to the Bloomberg School of Public Health in 2009 as the director of CAAT. He replaced the Center’s founding director, Alan Goldberg, PhD who will serve as the chair of CAAT’s Advisory Board. Prior to joining the Bloomberg School, Hartung served as the head of the European Centre for Alternative Methods (ECVAM) at the European Commission Joint Research Centre in Italy, and has been recognized as an integral figure in promoting the use of in vitro test methods that focus on human rather than animal biology. At the ECVAM, he assisted in the development of several test strategies that revolutionized the way safety assessments for chemicals are done in Europe. In addition, Hartung established and coordinated international agencies in the shared promotion of the first international validation study, which proved essential in expediting international adoption of new test methods.

A graduate of the University of Konstanz, Germany, Hartung received his doctorate in biochemical pharmacology and his medical degree in toxicology from the University of Tubingen, Germany. After receiving his MD, Hartung completed his medical internship in surgery at the University of Freiburg. He has published more than 200 scientific papers and has served on the editorial boards of Alternatives to Laboratory Animals (ATLA) and Alternativen Zu Tierexperimenten (ALTEX), and has been the recipient of multiple awards including the 2008 ALTEX Award and the 2006 Society of Toxicology Enhancement of Animal Welfare Award.