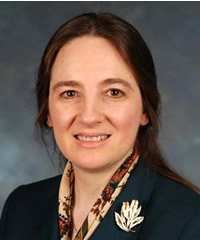 Karen Bandeen-Roche, PhD, was formally installed as the Frank Hurley and Catharine Dorrier Professor and Chair of the Department of Biostatistics during a ceremony held March 31 at the Johns Hopkins Bloomberg School of Public Health.

“To be entrusted with the Frank Hurley and Catharine Dorrier Professor and Chair in Biostatistics is humbling and an exceptional honor,” said Bandeen-Roche. “I want everyone to understand that Frank and Kit are much more to us than philanthropists. They are role models for us. They are Johns Hopkins family members. They are true friends to Biostatistics.”

Bandeen-Roche earned her PhD in Operations Research and Industrial Engineering from Cornell University, writing a dissertation in statistics under the direction of Professor David Ruppert. She received the Bloomberg School’s Advising, Mentoring and Teaching Recognition Award in 2001 and 2005. She is also a 1997 Brookdale National Fellow and a Fellow of the American Statistical Association (ASA). She served as chair of the ASA Biometrics Section in 2006 and as Chair of the Biostatistical Methodology and Research Design Study Section of the National Institutes of Health from 2006 to 2008.  Her disciplinary research is primarily focused on latent variable modeling, a methodology that is instrumental in investigating syndromes, disorders and traits that are difficult to measure precisely. Her collaborative research has been primarily in aging, ophthalmology and neurology and has contributed to advancing knowledge on disability, frailty and visual functioning in older adults and the ramifications of adverse environmental exposures for cognitive health.

Bandeen-Roche was selected as chair following an extensive international search. She is the ninth person to lead the Department and the first woman. She replaces Scott Zeger, PhD, who served as chair until becoming vice provost for research for Johns Hopkins University.

Frank Hurley, an alumnus, and Catharine Dorrier established the Frank Hurley and Catharine Dorrier Professor and Chair in Biostatistics in 2005. Hurley is chair and chief scientific officer of RRD International, a health care product development company that he co-founded in 2002. He is on the Board of Trustees of the Johns Hopkins University. Dorrier is a senior technical advisor at RRD International. She serves on the Bloomberg School’s Health Advisory Board, and Hurley is a past member of the same board. They have dedicated their careers to bringing safe and effective health care to people around the world. The couple believes that the key to improving international public health is the conversion of data into information, and information into useful knowledge.