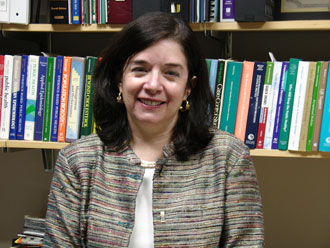 Miriam Alexander, MD, MPH, director of the General Preventive Medicine Residency Program and assistant professor at the Johns Hopkins Bloomberg School of Public Health’s Department of Population, Family and Reproductive Health, has been named president of the American College of Preventive Medicine (ACPM). President-elect Alexander will begin serving a two-year term as president on February 1, 2011, followed by a two-year term as immediate past president.

A resident member since 1988, Alexander was elected to serve by members of the ACPM for her contributions and commitment to the advancement of preventive medicine. As president, she will oversee and carry out the strategic priorities and objectives of the organization, as well as advocate for the overall health of the public and for increased translational and biomedical research.

“ACPM is the leading professional organization of preventive medicine and our continued success primarily depends on our ability to serve as an advocate for the health and well-being of the public, said Alexander.  “As president, I look forward to promoting public health partnerships in addition to addressing key public health issues such as universal health coverage, elimination of health disparities, stem cell research and preventing health effects associated with global climate change. I am honored to serve as president of the ACPM, and am extremely grateful to my many colleagues at the Bloomberg School and the ACPM for their continued support. ”

The American College of Preventive Medicine, founded in 1954, is the national professional society for physicians committed to disease prevention and health promotion of individuals, the community and the nation. The organization actively promotes the practice, teaching and research of preventive medicine, and publishes the American Journal of Preventive Medicine.—Natalie Wood-Wright