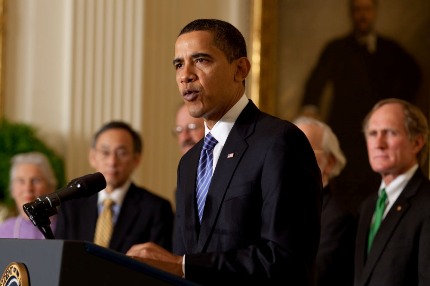 Peter Agre (right) stands behind President Barack Obama who offered remarks Monday, March 9, 2009, in the East Room of the White House before the signing of the Stem Cell Executive Order and Presidential Memorandum on Scientific Integrity. (White House Photo by Pete Souza)

Agre shared the Nobel Prize in Chemistry with Roderick MacKinnon in 2003 for his discovery of aquaporins—channels that regulate and facilitate water molecule transport through cell membranes, a process essential to all living organisms. He is also president of the American Association for the Advancement of Science (AAAS).