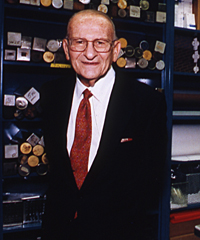 W. Harry Feinstone, a pharmaceuticals pioneer and retired executive, died on Thanksgiving at the age of 95. Feinstone, a graduate of the School, contributed millions of dollars to endow and support faculty at the Johns Hopkins Bloomberg School of Public Health. Feinstone Hall and the School’s W. Harry Feinstone Department of Molecular Microbiology and Immunology are named in his honor. He also created the Alfred and Jill Sommer Chair in Molecular Microbiology and Immunology, held by Diane Griffin, as well as endowments to recruit and support outstanding young scientists.

“Harry Feinstone cared deeply about public health,” said Michael J. Klag, MD, MPH, dean of the Bloomberg School of Public Health. “Everyone in our School knows the name ‘Feinstone.’ From his pioneering research to his continued generosity, he has inspired many of our faculty to fulfill our mission of improving health and saving lives.”

Feinstone was born in Poland and moved with his family to Brooklyn, N.Y. as a young boy. He attended the University of Arkansas where he earned his bachelor's degree in biology and chemistry. Feinstone joined the School of Public Health in 1936 where he worked as a laboratory assistant before completing his ScD in medical sciences in 1939.

While at the School, Feinstone began studying sulfa drugs, which were among the first chemical substances shown to have any real effect on infectious diseases.  Following graduation, he joined the pharmaceutical company, American Cyanamid, as director of biological chemotherapy. There, he pioneered the development of sulfa drugs, many of which are still used to treat illnesses today. Feinstone went on to consult for numerous companies and developed the antihistamine Anahist, which became the first cold remedy to be sold over the counter. In 1976, he retired from Schering-Plough, where he served as vice president for research and development. Feinstone helped make the company one of the world's largest manufacturers of cosmetics and over-the-counter drugs. As a second career, Feinstone joined the University of Memphis as its first Distinguished Research Professor before retiring in 1993.

“Harry Feinstone was incredibly important for our department—not only for his generous contributions to support the recruitment of new young investigators for the faculty, but also for his abiding and infectious interest in the science that was being produced.  He liked nothing better than to be sent a copy of an assistant professor’s latest paper or notice of an award. He will be greatly missed by all of us,” said Diane Griffin, MD, the Alfred and Jill Sommer Chair in Molecular Microbiology and Immunology.

Funeral services for Feinstone were held November 28 in his hometown of Memphis.