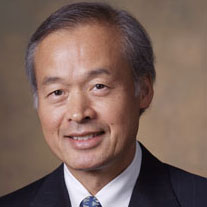 In a February 21 talk at the Johns Hopkins Bloomberg School of Public Health, Yamada recalled a night in the emergency room when he was a resident in internal medicine. A 16-year-old girl came in, a look of terror in her eyes, clutching her baby so tightly that the ER staff had trouble loosening her grip on the child.

“When we finally saw the baby, the baby was dead,” said Yamada, who for years put the painful experience out of his mind, only to have it come “roaring back” when he joined the Gates Foundation.

For Yamada, the recollection of that single death threw into stark relief the enormity of the challenges before him in his new role leading the Gates Foundation’s efforts to improve health in the developing world.

“When you think that 11 million children die each year, 4 million before the age of 1 month, then you begin to understand that the death of children by unnecessary and preventable causes is a huge problem,” said Yamada. “It’s so huge that it’s hard for us to even contemplate, but that’s the magnitude of the problem we face.”

At the Gates Foundation, which supports the Bloomberg School’s Bill and Melinda Gates Institute for Population and Reproductive Health, Yamada oversees more than $7 billion in grants targeted toward making inroads in a range of areas, including maternal, child and reproductive health, malnutrition and infectious diseases. Guided by the Foundation’s philosophy that every life has equal value, the Global Health program seeks to spur research and development, deliver needed health services and build capacity for global public health.

Yamada, who came to the Gates Foundation from GlaxoSmithKline where he was chairman of research and development, said that the Foundation’s work takes place “in a relatively indifferent world.” Of the 1,500 new medications developed in the past 30 years, he said that only 20 were directed primarily at diseases in the developing world.

In addition, only 7 countries are on track to meet one of the UN Millennium Development Goals to reduce by two-thirds the mortality rate of children under 5.

“It is a true moral tragedy, holding people back from their fullest potential,”said Yamada, a gastroenterologist who previously served as chairman of the Department of Internal Medicine at the University of Michigan Medical School.

To illustrate the Gates Foundation’s commitment to doing things differently in the world of global public health, Yamada detailed the organization’s strategy against HIV.

“We hone in on the fundamental problem and develop short-, medium- and long-term solutions, and surround the programs with support,” Yamada said.

AIDS prevention is the Foundation’s focus in the short-term, through the use of large-scale, evidence-based measures—including condoms, education and prevention of mother-to-child transmission—deployed in areas most affected by the epidemic. The Foundation currently finances a program in India targeting high-risk groups such as males who have sex with males and intravenous drug users, and supports a comprehensive HIV prevention and treatment initiative in Botswana.

A few steps behind on-the-ground prevention efforts, is the empowerment of women through the development of microbicides and other prophylactic measures, including medications.

And the development of an HIV vaccine is the long-term goal. Yamada cited the history of polio treatment in stressing the importance of vaccine research.

“When you walked into a hospital in the 1950s, there were wards upon wards of people in iron lungs. You could have spent an awful lot of money on better iron lungs, or you could have invested in a polio vaccine,” he said. “Imagine a world in which we have an HIV vaccine.”

The Foundation has adopted a team approach to HIV vaccine research, instead of  supporting individual efforts that in the past have not yielded effective results.

“If you’re not a PI (principal investigator) or lead author, you might as well not have written the paper from the standpoint of promotion,” he said. “It’s not good teamwork, and teamwork is necessary for creating an HIV vaccine.”

Yamada continued: “We fund a $287 million program that supports 16 teams of scientists and we insist that they communicate with each other through a central database. An oversight body monitors their progress, and makes certain that the program moves forward to develop a real vaccine.”

But the discovery of a vaccine is simply the first in a long series of steps before it can save lives. “You have to figure out how to make it, deliver it and create a market,” Yamada said. “In a pharmaceutical company you don’t make a product without a huge delivery plan. But in global health we often assume the results speak for themselves.”

Despite monumental obstacles in the path to bringing the fundamentals of health care to underserved countries, Yamada remains hopeful. Among his reasons for optimism: past successes, including the eradication of smallpox; promising research on new treatments for malaria and tuberculosis; and a growing interest in the public and private sectors in the problems of the developing world.

“People are dying; we have to address the issues with urgency and commitment,” Yamada said. “The time is now.”--Jackie Powder

Tachi Yamada’s appearance at the Bloomberg School was sponsored by the Center for Global Health and the Department of International Health.