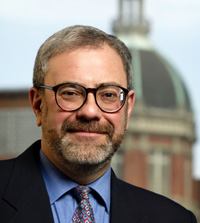 In a new analysis of the U.S. physician workforce, health policy expert Jonathan P. Weiner, DrPH, reports that increasing the number of medical students—as proposed by the American Association of Medical Colleges—is not the answer to the projected shortage of doctors.

Instead, Weiner says, the United States needs to reexamine itscare workforce supply and adopt a more global perspective to address the lack of quality health care. In addition, to improve the health of Americans, he argues that the additional funds for expanding medical training would be better spent on providing health care for the millions of uninsured. The article is published in the August 4, 2007, issue of the British Medical Journal.

“The objective of all this is to find creative and financially feasible ways to produce a medical workforce that balances clinical need, consumer preference, professional aspirations and population equity,” said Weiner, a professor in the Bloomberg School of Public Health’s Department of Health Policy and Management. “Although accomplishing this will hardly be easy, it will be essential.”

As it reexamines the current health care workforce, the U.S. needs to consider alternative models of care that emphasize primary care and application of information technology. Also, rather than focusing on doctors alone, there should be more emphasis on health care teams that include nurse practitioners, physician assistants and doctors of osteopathy, according to Weiner. These professions can take on some of the work of medical doctors and are viable health care resources.

As increasing numbers of medical students become specialists, the number of primary care physicians declines. Recent studies by Bloomberg School of Public Health researchers have shown this increase in specialists is likely to raise the cost of health care, however, there is little evidence it will increase quality of care.

Weiner also points out that if any physician shortage—real or perceived—is to be resolved, it requires a global solution. Currently about 25 percent of doctors in residency training programs in the United States are educated abroad. If more students graduate from U.S. medical schools without an increase in postgraduate training positions, international doctors will not find U.S. medical residencies sothey will not come to the country. The net result is a reduction in the number of internationally trained young doctors who will practice in the U.S.

Weiner’s analysis of previous unpublished data reveals that the number and types of doctors per person in the United Kingdom is increasingly reflective of the U.S. situation. In the recent past, the majority of practicing doctors in the United Kingdom were generalists; today specialists dominate. Weiner suggests that international leaders of health policy and medical education should band together to share research and policy analysis in order to maximize benefits to patients around the globe.

In an accompanying British Medical Journal editorial, Dartmouth’s David C. Goodman concurs with Weiner’s views. He says the U.S. should examine how to improve the health and well-being of the population using limited national funds, instead of creating more doctors. Goodman explains that expanding the medical workforce is unlikely to be cost-effective or produce better outcomes for patients. Goodman cites evidence that doctors do not generally settle in geographic areas where health care needs are greatest and that U.S. studies have shown no positive association between the number of doctors per person and health outcomes, access to doctors or patient satisfaction.

Public Affairs media contacts for the Johns Hopkins Bloomberg School of Public Health: Kenna L. Lowe or Tim Parsons at 410-955-6878 or paffairs@jhsph.edu. The full British Medical Journal analysis is available as a pdf upon request. In addition, it can be downloaded at www.bmj.com.