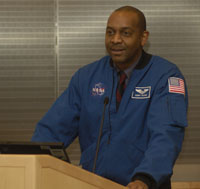 The history of space exploration is marked by trailblazing leadership and milestone achievements. In his own way, NASA astronaut Robert L. Satcher, Jr., PhD, MD, is charting a new path for future astronauts. At 41, he is the first orthopedic surgeon to be trained as a mission specialist.

Satcher visited the Bloomberg School of Public Health on February 28 as a featured speaker in the Bloomberg Leadership Lecture Series, which offers students an opportunity to learn from leaders in diverse professions.

“For me, a leader is one who provides direction. In its most noble form, leadership is about influence, specifically influencing people to make choices,” said Satcher.

Although Satcher said he always wanted to be an astronaut, he did not come to the job directly. Born in Hampton, Va., Satcher said his lifelong interest in science first took him to the Massachusetts Institute of Technology, where he earned a bachelor’s degree and a doctorate in chemical engineering. He then attended Harvard Medical School where he earned his medical degree and trained as an orthopedic surgeon. Satcher was on the faculty at the Northwestern University’s Feinberg School of Medicine when he was accepted into NASA’s astronaut program in 2004.

During the discussion, Satcher talked about the astronaut selection process and some of the rigorous training he endured, which included trips aboard the “Vomit Comet”—an airplane ride that simulates the zero gravity conditions of space. The training is to prepare him for a future space mission, possibly helping to complete the International Space Station, although he does not know when he will get an opportunity to travel to space.

Back on Earth, however, Satcher spoke of an urgent need for leadership in the health care community. “We all know our current health care system is broken. To solve these problems is a matter of will and resources. Leadership is central and essential to this process.”

Satcher said medicine and science could benefit from the same type of formalized leadership training that is readily available in corporate culture and the military. “As health care professionals, we must become effective leaders if we are to have any say in how our health care system will be structured in the future.”

When asked who inspired him as leader, Satcher singled out his parents, who were both educators, and his grandparents who were farmers in rural Alabama, as well as teachers and professors who he said provided inspiration through out his career.

Upcoming speakers for the Bloomberg Leadership Series include Morgan O’Brien, the founder of Nextel.--Tim Parsons