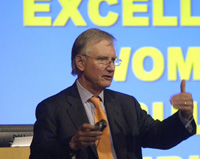 Best-selling author and “management guru”  Tom Peters recently told an auditorium of students, faculty and researchers at the Bloomberg School of Public Health that it takes more than good science to move research from the lab into the limelight.

Peters, whose seminal 1982 book, In Search of Excellence, detailed a business management style that emphasized innovation, action and autonomy within an organization, dispensed tips to his academic audience on achieving recognition in the public health arena.

“I respect the success of the research that is done here, but that’s not why I’m here,” he said. “What you do for a living is political. I’m an engineer, and I’ve got a PhD, but intelligence is highly overrated.”

Peters said it’s important to recognize that seemingly insignificant gestures can build political goodwill, recalling that he once taught a friend to write thank-you notes to business colleagues.

The result? “She told me it was the best thing that ever happened in her professional life,” he said.

“We teach everything at business school except what’s important—talking and listening,” Peters said. “You don’t accomplish a damn thing in this world unless you’re a fabulous salesperson, and it’s absolutely as true in the world of hard science.”

In addition to mastering an organization’s political landscape, he said that leaders and achievers typically don’t toe the line and don’t follow a plan.

“The definition of a loser in the world of organizations is somebody who tries to go straight up the hierarchy because they own an organizational chart,” Peters said.

Instead, he advised, “You go left, you go right; find a supporter here, a supporter there.”

“Freaks are the only ones who succeed, as in make it into the history books,” he said. “Whether it’s Picasso in painting, Newton in science, or Churchill, they were the ones who were deviants, who did it in a new way.”

Peters also cited the 2006 Nobel Peace Prize winner, economist Muhammad Yunus, as someone who defied convention and reaped the benefits. Yunus pioneered the use of micro-credit loans—particularly to women living under repressive social and economic conditions—to promote economic development.

“There were 750,000 variables against him,” Peters said. “He did his work in a Muslim country, Bangladesh, lending money to women. Go figure.”

Public health, too, he said, is about “implementation against all odds.”

“I want to see two of you get the Nobel Prize,” Peters told his audience. “And it will be because you used the research findings and then applied that last 98 percent of the work, called politics. I’m not arguing against the science. I’m saying the person who ends up in Sweden is the person who had political skills plus a heavy dose of IQ points.” -- Jackie Powder