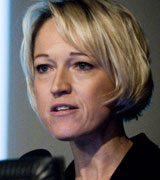 As chief operating officer of the International Antiviral Therapy Evaluation Center (IATEC) in the late 1990s, Marie Charles oversaw clinical trials on new, lifesaving drug therapies in developing countries. Based at the University of Amsterdam, Charles controlled an annual budget of $35 million and supervised 85 employees.

She had the money, the medications and the employees. But, as she learned from her program managers in the field, the combined resources weren’t enough to deliver the medications to patients. Consistently, the greatest obstacle was local health care workers’ lack of practical training in the treatment of HIV/AIDS patients.

“I would send my program managers down to Rwanda with the medications in suitcases and they would go to these clinics to explain the study protocol” Charles told an audience at the Bloomberg School earlier this month. “Invariably, they’d call me and say, ‘We can’t come back. Yes, we’re here at the clinic. Yes, there are doctors and nurses and there are patients lined up at the clinic who look like they may not be living for many months longer. But the health care workers here haven’t received training in HIV care. They don’t know what to do with the medications.”

Determined to do something to bridge this critical health care gap, Charles left her prestigious, financially secure position to found the International Center for Equal Healthcare Access (ICEHA) in 2001. Nurtured by Charles on a shoestring budget in its first years, the nonprofit now draws on a pool of more than 600 volunteers “clinical mentors”—mainly medical professionals from the U.S. and Europe—who travel to countries in need to train local health care providers in basic, clinical care of HIV patients. ICEHA currently has programs in 10 countries.

Charles, MD, who spoke at the School on December 4 as part of the Bloomberg Leadership Series, said that ICEHA differs from many volunteer medical organizations in that it seeks to create a local network of health care workers properly trained in HIV care instead of sending medical professionals to affected countries to provide direct patient care. The goal is to eliminate the need for outside donor assistance by teaching health care providers to deliver quality care with existing resources.

“They increase their skills, they become more passionate about their work and the patients feel it,” Charles said. “We pull out the minute we see they’re doing the best they can.”

Although ICEHA is now widely recognized for its work and countries request its services, six years ago Charles’s colleagues told her that her efforts to launch the organization amounted to “throwing my career away.”

“The only thing I had was a name, a small board of directors and a website explaining the concept. We had nothing else,” she said.

ICEHA had its beginnings in PharmAccess International, which Charles co-founded with her University of Amsterdam colleague, Joep Lange. In partnership with international businesses, the organization developed HIV/AIDS workplace programs in developing countries to provide treatment and counseling to employees.

When Charles’s personal life took her to New York, she decided to create ICEHA as a vehicle to bring quality HIV treatment to those who rely on public health care. Building on the PharmAccess blueprint, she set out to prove to donors that the clinical mentor model could work beyond the workplace setting. In November of 2001, she initiated a project in Vietnam teaching health care workers how to conduct HIV awareness seminars.

“It took two years, and on December, 31, 2003, we had a board meeting and the financial statement said there was one dollar in the bank,” Charles said, recalling that two board members resigned at that point. “I told them we’re a week or two weeks away from actually showing proof-of-concept. People will fund it once they see it.”

Within three weeks, Johnson & Johnson awarded ICEHA a $150,000 grant to send  clinical mentors to Cambodia. Since that jump-start four years ago, the organization has trained thousands of health care providers in resource-poor countries in proper HIV care, including the administration of antiretroviral drugs, the elimination of unsafe medical practices which may spread HIV, as well as maintaining accurate patient records.

ICEHA’s clinical mentors must go through a screening process, commit to a minimum of six weeks on an assignment and complete a preparation course in either New York or London. Both ICEHA donors and local funding sources cover volunteers’ expenses before and during assignments.

One of ICEHA’s most recent initiatives centers on rural villages in South Africa’s Limpopo and Mphumalanga provinces. As part of the project, two clinical mentors traveled with a new mobile health clinic, working with the staff of two nurses and one assistant to bring HIV testing, counseling and education to far-flung villages.

According to a diary of the assignment, the clinical mentors quickly established good relationships with the staff and set out to broaden the clinic’s reach. They advised the staff on examination skills and corrected some data collection and recordkeeping practices, information that determines funding amounts for the clinic. They also helped the nurses to figure out how to reach more young people through the clinic.

After completing his volunteer work with the mobile clinic, a clinical mentor posted a diary entry on his follow-up discussion with a clinic nurse: “They have had success in setting up the clinic at a school setting. Fourteen of the students got tested, and they plan to approach more schools to educate young people about HIV.”

Charles’s hopes for ICEHA include increasing her pool of clinical mentors to 2,000 and offering training in obstetrics/gynecology and emergency medicine. The organization, she said, has proven its capability to catalyze sustainable health care delivery with minimal resources.

“We go back a year later and you walk around those clinics and they’re considered state- of-the-art within their systems,” Charles said. “They’re vibrant places; it’s extraordinary.”--Jackie Powder