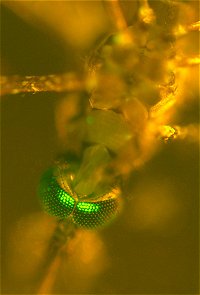 Take a video tour of the JHMRI laboratory where transgenic mosquito research is conducted. (QuickTime required)

Researchers at the Johns Hopkins Malaria Research Institute (JHMRI) determined that genetically engineered malaria-resistant mosquitoes fared better than their natural counterparts when fed malaria-infected blood. The results of their study indicated that genetically engineered (transgenic) mosquitoes lived longer and produced more eggs compared to wild-type mosquitoes. The results were published March 19, 2007, in the online early edition of the Proceedings of the National Academy of Sciences.

The Hopkins researchers said their findings are an important next step towards developing malaria-control strategies using genetic modification of mosquitoes. Theoretically, mosquitoes resistant to malaria could be introduced into nature to replace malaria-carrying mosquitoes. To replace wild-type mosquitoes, transgenic mosquitoes would need to produce more offspring and live longer. However, the researchers stressed that any potential malaria control strategy utilizing transgenic mosquitoes still require years of study.

For the study, Marcelo Jacobs-Lorena, PhD, and his JHMRI colleagues combined equal numbers of transgenic and wild-type mosquitoes and let them feed on malaria-infected mice. The mice were infected with Plasmodium berghei, which is not the same parasite that causes malaria in humans. After nine generations, the transgenic mosquito population grew to 70 percent, versus 50 percent at the beginning of the experiment. According to the researchers, this fitness advantage arose because the transgenic mosquitoes had a higher survival rate and laid more eggs. They said any potential negative effects of a transgene may be overcome by the advantage conferred by not being infected with malaria parasites.

"Transgenic malaria-resistant mosquitoes have a fitness advantage when feeding on Plasmodium-infected blood" was written by Mauro T. Marrelli, Chaoyang Li, Jason L. Rasgon and Marcelo Jacobs-Lorena. Rasgon and Jacobs-Lorena are with the W. Harry Feinstone Department of Molecular Microbiology and Immunology at the Johns Hopkins Bloomberg School of Public Health. Marrelli is currently with the Universidade de Sao Paulo, SP, Brazil and Li is with the Case Western Reserve University, Cleveland, Ohio.

This study was supported by funding from the National Institutes of Health and the Johns Hopkins Malaria Research Institute.