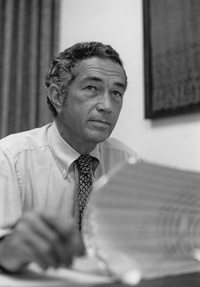 George G. Graham, MD, professor emeritus and founding director of the Division of Human Nutrition in the Bloomberg School’s Department of International Health, died January 14 at the age of 83. Graham was a pioneer in developing new approaches for treating and preventing malnutrition in young children, especially during infancy and early childhood.

Graham formally retired in 2001 after a career spanning four decades at the School. Part of his legacy is a diversified and strong program in human nutrition, which he helped establish. In 2005, the George G. Graham Professorship of Infant and Child Nutrition was established in his honor.

In 1937 at the age of 14, Graham enrolled at the University of Pennsylvania where he earned a bachelor’s degree in chemistry and his medical degree. In addition to an internship and residency in pediatrics at the British-American Hospital in Lima, Peru, Graham was also acting medical director from 1961 to 1965 at the Cleveland Clinic in Ohio.

In 1961, Graham was named a visiting pediatrician at what was then Baltimore City Hospital. He was appointed professor of international health at the School of Public Health in 1968. Among his many accomplishments, Graham was the founding director of the Department of International Health’s Division of Human Nutrition in 1976.

In addition to his work at the School of Public Health, Graham also served for 29 years as director of the Institute for Nutrition Research in Lima, which he established in 1961. During the 1980s, Graham was a member of President Ronald Reagan’s Task Force on Food Assistance. Colleagues credit him with being an early voice in warning of the long-term consequences of eating fatty meat on the heart and blood vessels, and of the link between obesity and convenience foods.

“George was passionate about guiding healthful diets through sound science, and was one of the most colorful, gracious, intellectually stimulating and outspoken faculty in this School over a period spanning four decades,” said Robert Black, MD, MPH, chair of the Bloomberg School’s Department of International Health.

Keith P. West, DrPH, MPH, said that Graham brought attention to the problem of malnutrition in developing countries as well as obesity and its relationship to convenience foods. “He was a champion and specialist in the prevention of early childhood malnutrition in Peru and the South American continent," said West, the George G. Graham Professor of Infant and Child Nutrition at the Bloomberg School, and a former student of Graham's.

Services for Graham were held January 18 at the Our Lady of the Chesapeake Roman Catholic Church in Pasadena, Md.