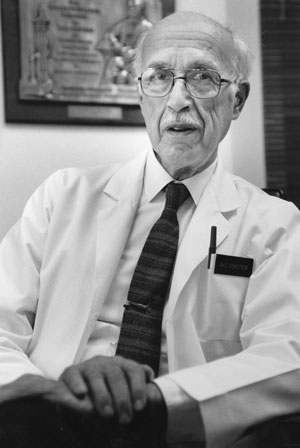 Keep it short. Be kind. Play something. Do what’s important, even if it’s not glamorous. Listen to good advice. Keep a sense of humor. Never throw anything away. Love what you do.

These instructions are just a few of the important lessons taken to heart by students, colleagues, friends and family of George Wills Comstock, whose life was celebrated at the Bloomberg School on September 28, 2007. With warm words about the legacy left by Comstock, Jonathan Samet, professor of Epidemiology, MD, MS, commenced the memorial, which was widely attended by an audience that had traveled from near and far for the gathering.

Praised by Michael J. Klag, MD, MPH ’87, dean of the School, as “a founder of modern epidemiology,” Comstock was remembered by many as an open, supportive mentor who touched the lives of everyone lucky enough to know him. His genius earned him the awe of the scientific community, but it was his eagerness to nurture students and colleagues that dominated the remembrances of him at the memorial.

Among Comstock’s many contributions to public health are his 21 years of service at the U.S. Public Health Service, his groundbreaking research in tuberculosis control, his studies of several types of cancer and predispositions to cancer, and his CLUE studies, the name of which comes from the mott “Give us a clue to cancer.”

Comstock, MD, DrPH ’56, MPH, often quoted Horace Mann: “Be ashamed to die before you have won some victory for humanity.” And the speakers at the memorial attested to the myriad victories Comstock won for humanity through his research and wisdom.

Physician and professor emeritus at the School, Comstock’s “first love” was controlling tuberculosis, said Kathy Helzlsouer, professor in Epidemiology. She remarked that he was years ahead of his time, accomplishing research in fields that didn’t yet exist, fields that would later come to be known, for example, as molecular epidemiology.

Commenting on Comstock’s devotion to the School and the community, Moyses Szklo, professor of Epidemiology, recalled him saying, “Without public health, epidemiology is fairly boring.”

Szklo, MD, DrPH, MPH, referred to Comstock as a “quintessential educator,” and he recalled that Comstock had a gift for conveying complex thoughts in simple language. In his role as editor of the American Journal of Epidemiology, he rejected papers with polite decision letters that gave helpful suggestions to the authors. Helzlsouer, MD, MHS, remembers him as a “consummate teacher,” someone who always took advantage of the teaching moment, converting errors in the classroom into lessons well learned. Klag recalled that Comstock was “always talking about history as a lesson.”

Jonathan Golub, assistant professor of Epidemiology, PhD, MPH, remarked that even the epitaph on Comstock’s headstone—“Phthisiologist, epidemiologist”—is an example of Comstock’s perpetual teaching posture. He included the word “phthisiologist” because he wanted people to look it up. (Unabridged dictionaries define phthisiology as the care, treatment and study of tuberculosis.)

Several speakers paid tribute to Comstock’s brilliance—many of his papers are still considered seminal in their fields—but also to his devotion and his kindness. “George Comstock belongs not only in the pantheon of the heroes of science,” said Szklo, “but also in the pantheon reserved for wonderful human beings.”  —Christine Grillo