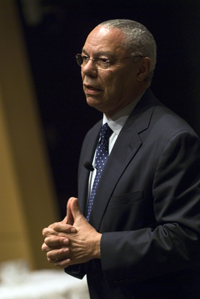 From his days as a young soldier commanding a few dozen infantrymen, to leading United States troops as Chairman of the Joint Chiefs of Staff, to heading U.S. diplomatic efforts as Secretary of State, Colin Powell’s style of leadership has changed little over the years.

Powell, who spoke at the School on April 4 as part of the Bloomberg Leadership Series,  told an overflow audience in Sommer Hall that throughout his career he has relied on key principles to guide outfits both large and small.

Powell said he learned his earliest lessons on how to lead as a young soldier at infantry school in Fort Benning, Ga.

“The focus was on the reality that a leader is not a leader without followers,” he said. “The purpose of a leader is to empower followers to get the job done.”

“You are taught to take care of your troops,” he continued. “You do that by investing in your troops, by making sure that you’re providing them with the skills, tools and equipment to get the job done. Only then will they see that you believe in them.”

To illustrate, Powell fast-forwarded to the beginning of his tenure as Secretary of State in 2001. One of his first actions was to replace the Department’s obsolete Wang computers.

“I told people, before I leave here, every single desk in every single embassy will have a fully capable, broadband-equipped computer,” he recounted. “In two years time, we did.”

Powell said an effective leader doesn’t settle for work that’s considered acceptable, but asks people to perform at a level that may seem at the outset to exceed their abilities.

“I’ve never been in a good outfit that didn’t have standards that caused everybody to complain,” he said. “They shouldn’t be impossible, but high enough so that everybody has to reach and do more than they think they’re capable of.”

Today, as a private citizen, Powell is applying some of his leadership skills to his role as an investor in Revolution Health Group, a company launched two years ago by AOL co-founder Steve Case in an effort to bring more consumer choice to health care with the ultimate goal of reducing health care costs. The business is built around a portal site that provides members with data on health care price and quality, as well as information on medical conditions, diet, exercise and medications, with an emphasis on preventive health care.

Powell said that Revolution Health envisions the creation of a system that provides  consumers with online access to their medical records and finances, as well as ratings of hospitals and doctors— information that is not readily available in today’s health care world.

We think we can provide this consumer-oriented option to people who want access to their own health care information” he said.

Powell supports universal health care and said that all Americans are entitled to the quality of care that he receives from the military.

“I have benefited from the greatest health care plan my whole life,” he said. “But it’s enormously expensive. How do we get the costs down and ration it, and make sure that we’re not providing too much health care to some and not enough to others?”  Jackie Powder