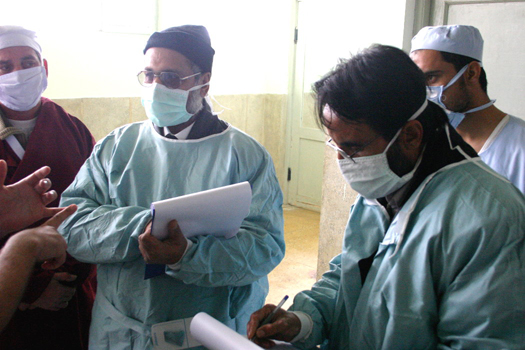 Results from assessments conducted by researchers from the Johns Hopkins Bloomberg School of Public Health and the Indian Institute of Health Management Research show substantial improvements in the health status of the people of Afghanistan after decades of conflict. From 2004 to 2006, the health system has shown improvement for many key measures in a majority of provinces. These results demonstrate that improvements in health service delivery have been achieved across the country in a short period of time, according to the researchers. The results from the assessments were presented to the Ministry of Public Health in June.

“The delivery of public health service is improving steadily in Afghanistan as the Ministry of Public Health makes progress towards meeting its goals,” said principal investigator Gilbert Burnham, MD, professor of international health at the Bloomberg School of Public Health and director of the Center for Refugee and Disaster Response. “Despite these gains, health facilities in Afghanistan have room for improvement in several areas.”

According to the 2006 assessment, more female patients than male patients used outpatient services, and the poor were more likely to use public sector services than the non-poor, which is in line with the Ministry of Public Health’s stated goal for equitable health care. Additionally, household surveys implemented by researchers from Johns Hopkins and the Indian Institute of Health Management Research in late 2006 estimated that of every 1,000 children born in Afghanistan, on average 129 die in the first year of life (infant mortality rate) and 191 die before reaching the age of five years (under 5 mortality rate). The surveys covered more than 8,200 households in rural areas in 29 of Afghanistan's 34 provinces. Previous estimates from UNICEF for the year 2000 place the infant mortality rate in Afghanistan at 165 per one thousand live births and the under 5 mortality rate at 257 per one thousand live births.

The researchers found improvement was needed in the management of tuberculosis treatment, laboratory services, reaching women for care during pregnancy and delivery, and health workers spending a sufficient amount of time with each patient.

“While deaths of infants and children under age five in Afghanistan remain high and the level of coverage of health services is still below the ideal, these results indicate that substantial progress has been made in improving the health of the people of Afghanistan since 2003,” said Burnham.

The assessments were funded by the Ministry of Public Health through grants from the World Bank.