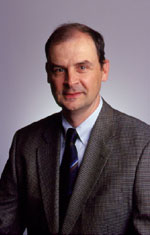 Thomas Burke, PhD, MPH, professor in the Department of Health Policy and Management at the Johns Hopkins Bloomberg School of Public Health, was awarded the inaugural 2007 Faculty Award for Excellence in Academic Public Health Practice from the Association of Schools of Public Health (ASPH) and Pfizer Inc.’s Public Health and Government Group.

The award recognizes graduate public health faculty for their teaching and practice excellence and who embody the finest qualities of public health professors and who serve as mentors to public health leaders of tomorrow. Burke received a plaque and $10,000. The ceremony was held at ASPH’s annual reception, which was held in conjunction with the American Public Health Association’s Annual Meeting on November 3-7, 2007.

Burke, director of the Bloomberg School’s Risk Sciences and Public Policy Institute and current chair of the National Academy of Sciences Committee on Improving Risk Analysis Approaches Used by the U.S. Environmental Protection Agency, has led the development of many influential reports grounded in public health practice, such as the work of the Pew Environmental Health Commission, which laid the groundwork for the Centers for Disease Control and Prevention’s National Environmental Public Health Tracking Program. Burke chaired a committee at Johns Hopkins to revise the School’s criteria for consideration of public health practice scholarship in the promotion process. He continuously informs students that careers in public health practice work are both exciting and rewarding, and he has reinforced his message by involving students in conducting research with the community and arranging innumerable internships for students with practice partners. Burke’s extensive and varied work experience is integrated into his research, teaching and mentoring, which enriches the knowledge of his students and colleagues. He has been awarded the School’s Golden Apple for excellence in teaching three times. A former deputy commissioner in the New Jersey State Department of Health, Burke is also a leading public health advocate on environmental issues.

Two other public health professors were also recognized for their service and achievements in cultivating the public health leaders of the future. The 2007 Early Career in Public Health Award was given to Robert Stephenson, PhD, MSc, assistant professor of Global Health at the Rollins School of Public Health at Emory University. The 2007 ASPH/Pfizer Award for Teaching Excellence was given to Richard K. Riegelman, MD, PhD, MPH, professor of Epidemiology and Biostatistics, of Medicine and of Health Policy, and founding dean of the School of Public Health and Health Services at The George Washington University.