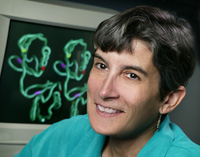 Cecile M. Pickart, PhD, a professor of biochemistry and molecular biology at the Johns Hopkins Bloomberg School of Public Health, died April 5 after a long battle with kidney cancer. She was 51.

Pickart earned her bachelor’s degree in 1976 from Furman University where she graduated summa cum laude and was co-valedictorian. An accomplished musician, she supported herself in college as a classical bass player. She went on to earn her doctorate in biochemistry from Brandeis University in 1982, which was followed by postdoctoral studies at the Institute for Cancer Research in Philadelphia, Pa. For 10 years, Pickart served on the faculty of the School of Medicine at the State University of New York at Buffalo. In 1995, she joined the Bloomberg School of Public Health as a professor in the Department of Biochemistry and Molecular Biology.

Throughout her career, Pickart’s research focused on the role of ubiquitin, an essential protein involved in critical cellular processes, including the repair of DNA. Ubiquitin searches the body for damaged or misshapen proteins and signals them for destruction. The goal in understanding how ubiquitin works is to assist in the development of drugs for prevention or treatment of diseases including cancer, Parkinson’s, Huntington’s and Alzheimer’s.

Pickart was highly regarded by her colleagues as an exceptionally talented and dedicated scientist and by her students as a caring mentor. Pickart’s groundbreaking research findings on ubiquitin received great prominence and she was widely sought as an organizer of and speaker at international scientific conferences on the topic.

Pickart is survived by her partner, Jennifer Rose; her parents, Stanley and Louise Pickart; her sisters, Maureen Pickart McClure and Andrea Pickart; and her brothers, Robert, David, George and Christopher; and numerous nieces and nephews.

In lieu of flowers, the family requests a donation be made in Cecile’s memory to the Sidney Kimmel Comprehensive Cancer Center at Johns Hopkins or another charitiable organization.--Tim Parsons