From Despair to Health Care: A Talk by Paul Farmer

Paul Farmer has a direct order from his AIDS patients back in Haiti: Since we're never invited to fancy symposiums and conferences (they tell him), you go and show our photos to the world. And so, during his September 22 talk at the Bloomberg School, the medical anthropologist showed slides of “Joseph.” 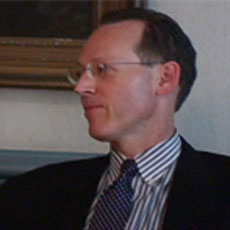 In the before snapshots, Joseph is an emaciated young man, with protruding ribs and glazed-over eyes, being tended by his mother. In the after shots, Joseph, who by now has taken highly active antiretroviral treatment (HAART) for six months, is a beaming and robust young man—as well as one of Farmer’s most zealous and effective co-workers. He is also a living embodiment of the transformative health care Farmer wants to bring to the developing world.

Farmer, MD, PhD, was persuaded to come to the School by Sommer Scholar Lydia Mann-Bondat, MS, MPH Student, who had worked with him on a peer education program to reduce HIV among Haitian teens.

In 1987, Farmer and colleagues founded Partners In Health (PIH) in rural Haiti, one year after that nation’s first case of AIDS was identified. Through PIH, they wanted to bring the benefits of modern medical science to the world's poorest and sickest communities and, as their mission statement says, to "serve as an antidote to despair."

His flagship program in the Haitian village of Cange has grown from a one-room structure to a health complex comprising a primary school, an infirmary, a surgery wing, a training program for community outreach workers, a 104-bed hospital, a women’s clinic and a pediatric care facility.

Farmer, who has lived for the past 20 years in a region of Haiti where the goats must be cleared off the local landing strip before a plane can touch down, swears by the community-based health care model. “Community-based care is the highest standard of care in the world,” he said of this strategy, in which all the needs of a community are addressed whenever possible by a holistic approach that uses accompagnateurs or companion helpers to deliver care. These trained members of the community make sure that the HIV- and TB-infected persons take their TB and HIV pills every day.

Early on, PIH’s founders realized that the sources of disease in the developing world are so numerous and so entertwined, that their organization could not merely cure TB or control AIDS but must tend to all the problems of poverty—food insecurity, illiteracy, unsafe water and all the rest.

Farmer, a professor at the Harvard School of Medicine, told the overflow audience how community-based AIDS projects challenge conventional thinking and often initially fluster local officials. The local health officers, however, are eventually won over to Farmer’s way of thinking when they see that his AIDS and TB programs, far from stealing precious resources away from primary health care, actually reduce stigmatization and lead to beefed-up public health. “Our rates of tetanus vaccinations, polio shots and prenatal care, for instance, are all climbing,” he said.

“In fact,” said Farmer, “AIDS can be the ‘battle horse’ that moves the whole public health agenda forward.” —Rod Graham