Michael J. Klag, MD, MPH, an internationally known expert on the epidemiology and prevention of heart and kidney disease, today assumed the position of dean of the Johns Hopkins Bloomberg School of Public Health. Klag was appointed dean-designate on May 16, 2005, and succeeds Alfred Sommer, MD, MHS, who stepped down as dean to pursue his research interests.

Established in 1916, the Bloomberg School of Public Health was the first school of its kind in the world and is the leading international resource for global health. It conducts research in more than 50 countries and has 469 full time faculty and 14,500 alumni, many of whom serve in leadership positions in ministries of health, the World Health Organization and other agencies and organizations. 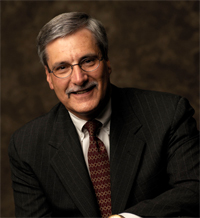 “I feel enormously privileged to lead an institution so critically important to the world’s health,” Klag said. “If you’re interested in public health, there’s no better institution than the Bloomberg School.”

In addition to being dean, Klag also holds appointments as professor in the Bloomberg School’s Department of Epidemiology and Department of Health Policy and Management. He will retain an appointment in the Department of Medicine at the Johns Hopkins School of Medicine, where he was formerly the David M. Levine Professor. Klag was also vice dean for clinical investigation in the School of Medicine. In that position, created in 2001, he was responsible for oversight of research that involves human volunteers.

A 1974 graduate of Juniata College, Klag earned his medical degree from the University of Pennsylvania in 1978 and his Master of Public Health degree from Johns Hopkins in 1987. That same year, he joined the Johns Hopkins faculty as instructor of medicine and director of the clinical track of the Preventive Medicine Residency Program at the School of Hygiene and Public Health.

He was a founding member and interim director of the university’s Welch Center for Prevention, Epidemiology and Clinical Research; director of the Division of General Internal Medicine in the School of Medicine; and, in 2000-2001, interim physician-in-chief of The Johns Hopkins Hospital and interim director of the Department of Medicine in the School of Medicine. He has published more than 120 peer-reviewed articles and is a fellow of the American College of Physicians. In 1998, he was editor-in-chief of The Johns Hopkins Family Health Book.

Klag was one of the first epidemiologists to start to unravel the risk factors for, prevalence of and effective intervention strategies for kidney disease. He also has focused on the role of ethnicity in disease, searching, for instance, for explanations of the different risks among different groups for developing kidney disease. Since 1988, Klag has directed the Precursors Study, a project begun in 1946 that tracks the health of Johns Hopkins School of Medicine alumni over many years to uncover risk factors and diagnostic markers for various diseases.

Klag succeeds Alfred Sommer, MD, MHS. Sommer, the dean since 1990, will remain active in research and in programs to improve global health and prevent blindness. Under Sommer, the Bloomberg School has grown significantly in numbers of students and faculty, in research funding and in philanthropic support. In 2004, it completed a 12-year, $130 million expansion and renovation of its facilities.

The Bloomberg School of Public Health enrolls more than 1,800 students from 71 nations in masters and doctoral programs in disciplines as diverse as environmental health, population and family health, biostatistics, molecular microbiology and immunology and international health. The School wins a quarter of all federal research funding awarded to the 33 U.S. schools of public health.