Author Brings "The Great Influenza" to the School (web article)

Even though it killed at least 40 million people in less than a year, the 1918 influenza pandemic's most alarming feature may have been that it nearly extinguished the basic humanitarian impulses that bind civil society together. 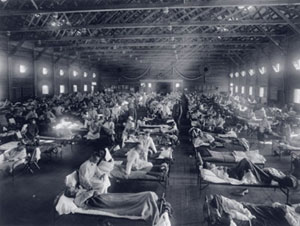 An emergency hospital at Camp Funston, Kansas, is packed with patients felled by the 1918 influenza epidemic.

So says John Barry, author of The Great Influenza: The Epic Story of the Deadliest Plague in History (Viking 2004). Barry was at the Johns Hopkins Bloomberg School of Public Health March 2 to talk about history's most calamitous infectious disease pandemic, which killed more people in 24 weeks during 1918—1919 than AIDS has in 24 years.

According to Barry, those still healthy were too panicked by the disease's violent symptoms (rib-cracking coughing spells, intense pain, a cyanosis of the skin so deep blue its like has never been seen since) to even look in on their ill neighbors. Some of the sick, and their children with them, simply starved to death for lack of attention.

Barry quoted one health official after he had failed to recruit a single volunteer: "Nothing seems to rouse them. Children are starving and still they hold back." Even in tight-knit rural communities, says Barry, neighbors didn't rally 'round.

He also quoted Victor Vaughan, Surgeon General of the Army at the time—not, according to Barry, some flibbertigibbet given to impulsive pronouncements. In October 1918, Vaughan said, "If the epidemic continues its mathematical rate of acceleration, civilization could easily disappear from the face of the earth within a few weeks." Photographs taken of big cities at the time reveal virtual ghost towns: empty sidewalks and streets, with only a few mask-wearing city workers or an ambulance in sight. Some municipalities made it a crime to shake hands.

The 1918 pandemic began as a mild spring "wave," explained Barry, currently a distinguished visiting scholar at Tulane University's Center for Bioenvironmental Research. In fact, this initial stage was so mild that many did not think it was influenza at all. A July 13 article in The Lancet that year states, for instance, that the disease certainly wasn't influenza because its symptoms were too mild, "of very short duration and so far absent of relapses or complications."

Read "The Blue Death," about the 1918 influenza pandemic, in the fall 2004 issue of the School's Magazine.

A Gentle Beginning—but a Lethal Follow-Through

Eight weeks later, however, a second, extremely lethal wave began to roll. William Welch, founder of the Bloomberg School and its first dean, performed a few autopsies on victims and was stunned to discover what he believed was an entirely new disease.

What was it? the authorities asked. Unlike most varieties of the flu, this one spared the young and the elderly while scything through the 20- to 40-year-olds: People under 65 accounted for 99 percent of the excess mortality of the time. The victims' intense pain, their hemorrhaging from the skin, eyes and ears, suggested dengue fever. Or was the dark-blue of victims' skin actually closer to black, as in Black Death?

The Authorities Downplay the Epidemic

Further exacerbating people's fear and sense of isolation, says Barry, was the fact that government and health authorities were not leveling with their constituents about what was happening. World War I was just winding down but it had conditioned governments everywhere to keep up morale by issuing a constant stream of soothing half-truths and lies. Health officials, believing their task was above all to keep people calm, downplayed the tragedy. "Fear Kills More Than the Disease," they scolded.

Even the pandemic's nickname was spurious. Although the evidence strongly suggests that this pandemic was spawned in the U.S., in the state of Kansas, it was quickly dubbed the "Spanish Influenza" because Spain, neutral throughout the war, wasn't bothering to hide its awful travails with the epidemic. 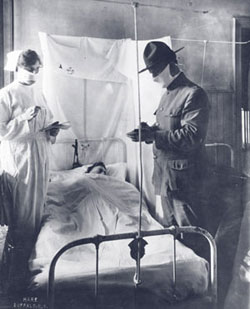 Right beside the blithe pronouncements, of course, was the appalling reality: About 40 percent of the victims were dying. Barry recounted how, in Philadelphia, horse-drawn carts made the rounds while their drivers cried out, "Bring out your dead!" And after the coffin supply quickly dried up, bodies had to be rolled unceremoniously into mass graves dug by steam shovels. Barry quoted from a letter written by one U.S. physician to another: "[it] beats any sights they had in France after a battle." Meanwhile, the official line continued to be, "Don't Catch the Spanish Hysteria!"

Then, by November 1918, the Great Influenza began to burn out, perhaps because it had killed so many of its principal hosts, young adults, so fast. Some speculate that their vigorous immune systems may have mounted such a violent response that it damaged their bodies irreversibly.

Should We Be Worried?

Donald Burke, MD, in his introduction of Barry, explained why infectious disease experts today are so concerned about the possibility of a new influenza pandemic. Burke, a professor of International Health and director of the School's Center for Immunization Research, said that all avian viruses are adept at swapping genes with one another. If a human is infected simultaneously by an avian and a human flu virus, those two microbes can combine their genetic material inside a cell. This union could create a new strain of influenza—possibly one that not only could jump back and forth between species but also would be impregnable to the human immune response.

"We're seeing lots of these cross-species interactions now in Southeast Asia," Burke said. "I call it 'viral chatter' because it's like the terrorist 'chatter' that goes on over the airwaves and suggests something serious is just around the corner." So far, he said, only 110 people have come down with what's currently the scariest brand of avian flu, H5, but 84 of those patients have died.

Barry noted another cause for concern: The people who die during a bout of today's flu are overwhelmingly the victims of a secondary bacterial pneumonia, which only gains a foothold in the lungs after the flu virus has softened things up. In 1918–1919, however, an estimated half of all deaths were caused by a killer viral pneumonia known as acute respiratory distress syndrome, or ARDS, a massive primary infection usually fatal within 3–4 days. Barry said that even the best-equipped ICUs of today still routinely lose 60 percent of ARDS patients.

So, could it happen again? Barry thinks so, and he quotes the Institute of Medicine of the National Academy of Sciences: "… another influenza pandemic is possibly inevitable and even overdue." The solution, he says, is for governments to immediately start making a major investment in the world's vaccine-producing infrastructure. "It will be a race," he says, "a race to the death." —Rod Graham