Stress, Mood and Other Factors May Affect Mom’s Diet During Pregnancy

Stress, anxiety, fatigue and other psychosocial characteristics may influence the food choices women make during pregnancy, according to a study by researchers at the Johns Hopkins Bloomberg School of Public Health. A mother’s diet can affect the healthy development of her fetus and the health of her newborn. The study, the first to examine the affect of psychosocial factors on diet during pregnancy, appears in the June 2005 issue of the Journal of the American Dietetic Association. 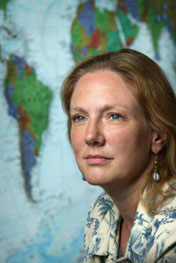 “Our findings suggest that women who are more fatigued, stressed and anxious eat more food, particularly carbohydrates. While eating more food led to an increase in some important micronutrients, it also led to a decrease in others, like folate and vitamin C,” said the study’s corresponding author,Laura Caulfield, PhD, an associate professor at the Bloomberg School of Public Health’s Center for Human Nutrition. “Psychosocial factors should be considered when counseling women with regard to diet during pregnancy.”

For the study, the researchers assessed the dietary intake and psychosocial characteristics of 134 women who had low-risk, normal pregnancies. The psychosocial factors examined included stress, anxiety, depressed mood, anger, fatigue and social support.

According to the study, women who were more fatigued during pregnancy reported higher consumption of energy foods and zinc. They also reported lower intakes of folate. Women who reported feeling stressed ate more breads and snack foods containing fats, proteins, iron and zinc. Anxious feelings were associated with a lower intake of vitamin C. Women who felt hassled by the pregnancy experience reported eating less meat.

The study findings remained significant after the researchers calculated for maternal age, education, body mass index and other factors. However, they did not find a relationship between eating and a depressed mood, anger or social support.

“Our research may provide fresh insights about factors related to dietary intake during pregnancy and open new avenues for increasing the effectiveness of nutrition programs,” said Caulfield.

“Psychosocial influences on dietary patterns during pregnancy” was supported a grant from the National Institute of Child Health and Human Development.