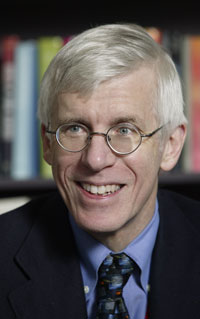 Jonathan M. Samet, MD, professor and chair of the Department of Epidemiology, was presented with the George Wills Comstock Award from the American Lung Association of Maryland (ALAM) on April 23 at the 44th annual meeting of the Maryland Thoracic Society. Dr. Samet was recognized for his lifelong dedication to furthering lung health through research, teaching and patient care.

Much of Dr. Samet’s early work dealt with background radiation and lung cancer. For many years, he has been a leader in the campaign against active and passive smoking, both as a member of the Working Group on Tobacco Smoking, International Agency on Research on Cancer of the World Health Organization and as director of the Institute for Global Tobacco Control at the Johns Hopkins Bloomberg School of Public Health.

He was also a major expert witness in the lawsuits that won large awards from the tobacco industry. In the field of air pollution, he is one of the acknowledged leaders on the topic of small particulates as they relate to cardio-respiratory health. He developed the Risk Science and Public Policy Institute at the Johns Hopkins Bloomberg School of Public Health and has been its co-director since 1995.

The George Wills Comstock Award was established in 1988 to honor researchers for their contributions in the fight against lung disease and is named for Dr. Comstock, a professor emeritus in the Department of Epidemiology at the Johns Hopkins Bloomberg School of Public Health and a prominent Maryland pulmonary physician. The award is presented annually to individuals to recognize their efforts to promote respiratory health.

“Dr. Samet is an extraordinary researcher with major accomplishments in many fields, most of which are of vital interest to the Lung Association and Thoracic Societies,” said Stephen Peregoy, president and CEO of the ALAM. -- Kenna L. Brigham

Public Affairs media contacts for the Johns Hopkins Bloomberg School of Public Health: Kenna Brigham or Tim Parsons at 410-955-6878 or paffairs@jhsph.edu. Photographs of Jonathan Samet are available upon request.