Researchers must keep an “open mind” as they try to close the daunting gaps in our understanding of the malaria parasite, said Louis H. Miller, MD, during his keynote address to the Second International Conference on Malaria Research being held March 25-26 at the Johns Hopkins Bloomberg School of Public Health.

Even something as fundamental as how the malaria parasite gets inside human red blood cells remains unknown, said Miller, head of the Malaria Vaccine Development Branch at the NIH's National Institute of Allergy & Infectious Diseases. More data are needed to gain insights into the molecular mechanisms of how the parasite invades the human body.

More than 275 researchers from 13 countries are attending the conference on malaria research, sponsored by the Johns Hopkins Malaria Research Institute at the School of Public Health. 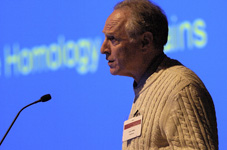 The conference’s second day includes lectures about chloroquine resistance, promising new anti-malarial agents, and the use of geographic information systems in fighting malaria. The conference concludes with a special lecture on aquaporin water channels by Nobel laureate Peter Agre.

Despite mankind's longstanding struggle to control mosquito populations, the World Health Organization currently estimates that each year malaria causes 300 to 500 million infections and 1.5 to 3 million deaths. Malaria kills over 5,000 Africans every day.

Malaria is perhaps even tougher to combat than HIV or tuberculosis because of its multiple distinct life-cycle stages and its genetic complexity, which allow the Plasmodium parasite to adapt rapidly to drugs and to our immune system's efforts to render it ineffective. With the aid of mosquito vectors, a single infected individual can transmit to hundreds of other individuals within months, far outstripping the infectiousness of HIV or tuberculosis. --Rod Graham