Viktor Yushchenko, the apparent winner of Ukraine’s Dec. 26 presidential election, is believed to have been poisoned with dioxins. Robert Lawrence, MD, associate dean and the Edyth Schoenrich Professor of Preventive Medicine at the Bloomberg School of Public Health, chaired an Institute of Medicine committee in 2003 to examine the impact of dioxins in the food supply. The Office of Communications and Public Affairs spoke with Dr. Lawrence about Mr. Yushchenko’s case and the health risks that dioxins pose.

Office of Communications and Public Affairs: What are dioxins and where do they come from? 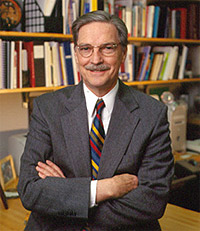 Robert Lawrence: Dioxins are a family of organic compounds polluting the environment. They are a group of chemicals, which include 75 different chlorinated molecules of dibenzo-p-dioxin and 135 chlorinated dibenzofurans. Some polychlorinated biphenyls (PCBs) are referred to as dioxin-like compounds. Tetrachloro-dibenzo-para-dioxin, or TCDD, is a particularly toxic dioxin, which is associated with many harmful health effects. It is used as the benchmark for determining toxicity of other dioxins. It was also an ingredient in Agent Orange, a defoliant used during the Vietnam War.

You need three things to make dioxins: heat, organic material and chlorine. Dioxins are produced by the incineration of man-made compounds, such as plastics, but they also occur in nature. Dioxins have been detected in sediments from old ocean beds, which many scientists believe were probably produced by ancient forest fires or volcanic eruptions.

Since the Environmental Protection Agency was created in the 1970s and more stringent air standards imposed, dioxin levels in the environment have decreased by 70 percent. The bad news is that the incineration of medical waste, which contains a great deal of polyvinyl chloride, continues to be a major source of dioxins in the environment. Many of the non-reusable plastic products used in hospitals were developed to reduce the risk of infection and the spread of disease and they are incinerated for the same concerns. A group called Health Care Without Harm is working very actively to encourage hospitals to reduce the levels of plastics, mercury and other pollutants from medical waste.

JHSPH: Recent photos of Mr. Yushchenko show that his face has become bloated and scarred. Is this a symptom of dioxin poisoning?

RL: Mr. Yushchenko appears to be suffering from chloracne, which is a common skin manifestation of dioxin poisoning. The condition can be very painful.

Dioxins are also carcinogenic, which is the main long-term human health threat. There appears to be no safe threshold for exposure.

JHSPH: Mr. Yushchenko believes he was deliberately poisoned with dioxin, but how are most people exposed to dioxins?

There are also the “Ranch Hand” studies that examined the health of over 1,200 U.S. Air Force personnel who worked with Agent Orange. These servicemen have been followed for many years by the Veterans Administration and are still being monitored today. Many of them, particularly the ground technicians who loaded spray-planes with Agent Orange, developed chloracne, like Mr. Yushchenko.

Most people are exposed to dioxins throughout their lifetime in small amounts through the foods they eat, especially through the fat of meat, eggs, whole milk, cheese and other dairy products. Dioxins are taken up by fish and other animals, where they get concentrated and stored in fatty tissue.

JHSPH: The Institute of Medicine committee you chaired in 2003 wrote a report, “Dioxins and Dioxin-like Compounds in the Food Supply,” which contained special recommendations for women of child-bearing age and young children for limiting dioxin exposure. What were those recommendations?

RL: While we were compiling that report, it came as a bit of a shock for me to learn that the average person born today will receive their highest exposure to dioxins as a developing fetus and as a nursing infant. Much of that exposure comes from breast milk as the mother mobilizes fatty fat, where dioxin is sequestered, to form breast milk. Breastfeeding is still highly recommended, however, because the benefits of breastfeeding far outweigh the risks of dioxin exposure.

Our report recommended that women who are pregnant or wish to become pregnant should limit their consumption of animal fats, which includes meats and dairy products, because they are known to contain dioxins. This is equally important for very young girls, because dioxins accumulate in the body over time.

Following this advice has several additional benefits. For one, it reduces the exposure to PCBs and other chemical pollutants, which can also be found in animal fat. It also reduces the consumption of saturated fat, which is linked to an increased risk for cardiovascular disease and stroke, and because of its caloric density, may contribute to overweight and obesity. Globally, the industrial raising of animals and the production of meat products has a negative impact on the environment. Reducing the consumption of meat could reduce the demand for these products and the environmental impact of factory farms.

JHSPH: What can we do to reduce our exposure to dioxins?

RL: On an individual level, you can lower your exposure to dioxins by reducing your consumption of fatty foods, which are known to contain dioxins and dioxin-like compounds.

Ultimately, the best course of action will be to eliminate dioxins from the environment. As I mentioned, ambient levels of dioxins have been dropping over the last 30 years, because of better environmental regulations, but more needs to be done.

One study, conducted by Keith Cooper of Rutgers University, uncovered sky-high levels of dioxins in catfish and chicken. He traced the source of the exposure to ball clay, which is a fine clay mined in Mississippi from sedimentary layers formed more than 60 million years ago. The clay was used as an additive in feed pellets to hold them together.