Awards recognizing the achievements of faculty, students and staff were presented from individual departments, the School as a whole, the alumni association, the Interaction Community Outreach Program and the Student Assembly. Program and List of Awards

Among the many honors, three Golden Apple awards were given by the Student Assembly to faculty chosen for excellence in teaching. These faculty members are highlighted below. 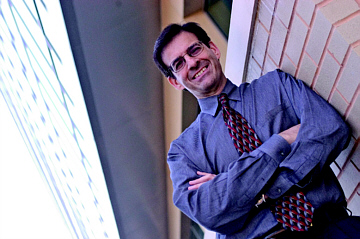 “See? You wrote it down,” says Brookmeyer, a professor of Biostatistics at the School of Public Health, who just won his third Golden Apple Award. “And you were probably thinking, ‘Hmmm? what’s next?’ If you’re taking notes from the blackboard, from the discussion, you take ownership of the material—it’s in your handwriting.”

Although he has been teaching at the School since 1981 and now uses computer simulations and the occasional PowerPoint presentation to teach complicated statistical concepts, Brookmeyer still waxes enthusiastic about the blackboard.

“The blackboard... there’s a participation that occurs when you’re working through your lecture together with the class. With the blackboard, everybody’s on a level playing field, interactive. With PowerPoint, there’s not the engagement or interaction—you’d have read the 'What is statistics?' slide and said, ‘I’ll get the handout.’ ”

Everything Brookmeyer does in class is aimed at grabbing his students’ attention and making sure that the technical concepts he’s explaining are made real for them. “It’s too easy to hang your hat on a formula,” he says. “You have to explain, in a way that’s grounded in common sense, why they’re using that formula. Equations are helpful, but students need to have a gut understanding of them. Otherwise, the teacher is just hiding behind the equation.”

Students must internalize biostatistical concepts if they are ever going to be able to apply a statistical method to new situations. “If the student is only able to plug data into a formula, that’s just a cookbook; a computer can do that,” explains Brookmeyer. “But a computer can’t see how you can apply an old concept in a new way. The teacher is always trying to show the overall architecture of the ideas.”

And there’s an optimal architecture for every message. “There are lots of messages out there, and the instructor’s job is not to compress more and more information into a short time or convey a sea of information, but rather to show what’s important, what’s not, and build to that architecture.”

Finally, Brookmeyer stresses that all teachers must find their own style, the classroom manner that feels most comfortable. “You can’t fake it or force it,” he says. “Don’t try to be something you’re not because what works for some won’t work for others. For instance, some are great at humor ... me, I can’t tell a joke.” —Rod Graham 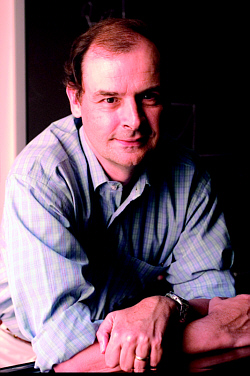 For Thomas Burke winning this year’s Golden Apple was a great honor, because it represents recognition from the students. He views teaching as his “fundamental calling” and it was the main reason he left a career in government years ago as a public health official for the state of New Jersey. Since joining the School of Public Health in 1990, Burke has received three Golden Apple awards for his teaching. The latest he won for his introductory course on risk science.

“This was a total surprise, but a wonderful surprise,” said Burke, who is a professor of Health Policy and Management.

“It is great to be recognized by the students and it’s so great to teach here, because the students are so engaged and motivated. They are the public health leaders of the future.”

Burke teaches introduction to risk science, which is the principal tool to assess public health risks and turn that assessment into effective strategies and public policies. To motivate students, Burke designed the course around case studies of current public health problems and issues. This year, students examined the environmental health impacts of the 2001 attack on the World Trade Center in New York City. 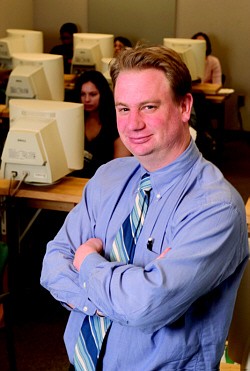 John McGready, winner of one of this year’s Golden Apple teaching awards, never planned on being a teacher.

Instead, McGready, an instructor in the Department of Biostatistics, began his statistical career working as a quantitative policy analyst at a public policy institute after graduating from Harvard. It was there that he realized what he liked doing most. “What I really enjoyed was communicating with my colleagues and with other agencies,” he said. “I wanted to up the communication component of what I did.”

Teaching, he says, was the next logical step.

After teaching math at a Washington, DC, high school for a year, McGready stumbled upon the ad for his current Department of Biostatistics position on the American Statistical Association website. “It was just serendipity,” he says. “I never went to that site.”

That was five years ago, and this is McGready’s second Golden Apple. He won his first in 2001 for the medium-sized class category. This year, McGready is the winner in the large-sized class category. “Teaching a large class requires more coordination, more energy, more assistance, and more time,” he said.

The class is Statistical Reasoning in Public Health class, which he teaches both on campus and online. In addition to time spent teaching class and with students in office hours, McGready also spends much of his day answering email from students. The email, he says, is especially important for online students, since it is the only way to get to know them.

“I like interaction with students and different backgrounds. I love turning them on to something they can make germane to what they’re working on. I try to explain things in ways that are intuitive as possible,” he says. “Also, teaching keeps my own understanding high.”

Ever the statistician, McGready adds: “I can’t quantify how much learning and relearning I’ve done in the five years I’ve been at the School.” —Kristi Birch

Photos by Will Kirk