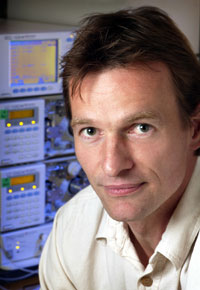 The Internet has been flooded with false email warnings to avoid freezing water in plastic bottles so as not to get exposed to carcinogenic dioxins. One hoax email has been erroneously attributed to Johns Hopkins University since the spring of 2004. The Office of Communications and Public Affairs discussed the issue with Rolf Halden, PhD, PE, assistant professor in the Department of Environmental Health Sciences and the Center for Water and Health at the Johns Hopkins Bloomberg School of Public Health. Dr. Halden received his masters and doctoral degrees researching dioxin contamination in the environment. We sat down with him to set the record straight on dioxins in the food supply and the risks associated with drinking water from plastic bottles and cooking with plastics.

Question: What are dioxins?

Answer: Dioxins are organic environmental pollutants sometimes referred to as the most toxic compounds made by mankind. They are a group of chemicals, which include 75 different chlorinated molecules of dibenzo-p-dioxin and 135 chlorinated dibenzofurans. Some polychlorinated biphenyls (PCBs) also are referred to as dioxin-like compounds. Exposure to dioxins can cause chloracne, a severe form of skin disease, as well as reproductive and developmental effects, and more importantly, liver damage and cancer.

Question: Where do dioxins come from?

Answer: We always thought dioxins were man-made compounds produced inadvertently during the bleaching of pulp and manufacturing of pesticides like Agent Orange and other chlorinated aromatics. But dioxins in sediments from lakes and oceans predate these human activities. It is now generally accepted that a principal source of dioxins are various combustion processes, including natural events such as wild fires and even volcanic eruptions.

Today, the critical issue is the incineration of waste, particularly the incineration of hospital waste, which contains a great deal of polyvinyl chloride and aromatic compounds that can serve as dioxin precursors. One study examined the burning of household trash in drums in the backyard. It turns out that these small burnings of debris can put out as much or more dioxins as a full-sized incinerator burning hundreds of tons of refuse per day. The incinerators are equipped with state-of-the-art emission controls that limit dioxin formation and their release into the environment, but the backyard trash burning does not. You set it ablaze and chemistry takes over. What happens next is that the dioxins are sent into the atmosphere where they become attached to particles and fall back to earth. Then they bind to, or are taken up, by fish and other animals, where they get concentrated and stored in fat before eventually ending up on our lunch and dinner plates. People are exposed to them mostly from eating meat and fish rich in fat.

Question: What do you make of this recent email warning that claims dioxins can be released by freezing water in plastic bottles?

Answer: No. This is an urban legend. There are no dioxins in plastics. In addition, freezing actually works against the release of chemicals. Chemicals do not diffuse as readily in cold temperatures, which would limit chemical release if there were dioxins in plastic, and we don’t think there are.

Question: So it’s okay for people to drink out of plastic water bottles?

Answer: First, people should be more concerned about the quality of the water they are drinking rather than the container it’s coming from. Many people do not feel comfortable drinking tap water, so they buy bottled water instead. The truth is that city water is much more highly regulated and monitored for quality. Bottled water is not. It can legally contain many things we would not tolerate in municipal drinking water.

Question: Water bottles aside, are plastics products for daily use a potential concern? What are phthalates?

Answer: Having said this, there is another group of chemicals, called phthalates. Phthalates are sometimes added to plastics to make them flexible and less brittle, although they are not typically found in plastics used for water bottles sold in the United States. Phthalates are environmental contaminants that can exhibit hormone-like behavior by acting as endocrine disruptors in humans and animals. If you heat up plastics, you could increase the leaching of phthalates from the containers into water and food.

Question: What about cooking with plastics?

Answer: In general, whenever you heat something you increase the likelihood of pulling chemicals out. Chemicals can be released from plastic packaging materials like the kinds used in some microwave meals. Some drinking straws say on the label “not for hot beverages.” Most people think the warning is because someone might be burned. If you put that straw into a boiling cup of hot coffee, you basically have a hot water extraction going on, where the chemicals in the straw are being extracted into your nice cup of coffee. We use the same process in the lab to extract chemicals from materials we want to analyze.

If you are cooking with plastics or using plastic utensils, the best thing to do is to follow the directions and only use plastics that are specifically meant for cooking. Inert containers are best, for example heat-resistant glass, ceramics and good old stainless steel.

Question: Is there anything else you want to add?

Answer: Don’t be afraid of drinking water. It is very important to drink adequate amounts of water and, by the way that’s in addition to all the coffee, beer and other diuretics we love to consume. Unless you are drinking really bad water, you are more likely to suffer from the adverse effects of dehydration than from the minuscule amounts of chemical contaminants present in your water supply. Relatively speaking, the risk from exposure to microbial contaminants is much greater than that from chemicals.

And here’s one more uncomfortable fact. Each of us already carries a certain body burden of dioxins regardless of how and what we eat. If you look hard enough, you’ll find traces of dioxins in pretty much every place on earth. Paracelsus the famous medieval alchemist, used to put it straight and simple: it’s the dose that makes the poison.--Tim Parsons