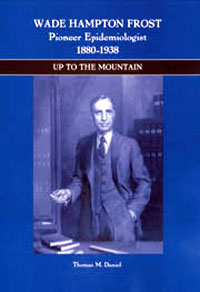 Wade Hampton Frost (1880–1938), chair of the School's first Department of Epidemiology and a legendary figure in public health, was by most accounts a terrible lecturer.

According to Thomas M. Daniel, MD, who spoke at the School recently about his new biography of Frost, Up to the Mountain. Wade Hampton Frost, Pioneer Epidemiologist. 1880-1938 (University of Rochester Press, 2004), the pioneering epidemiologist would hold a cigarette in one hand while lecturing in the classroom, a piece of chalk in the other (almost never writing anything on the board), and speak so softly that students had to strain to hear.

Dr. Daniel, professor emeritus of medicine, Case Western Reserve University, is quick to add, however, that Frost's lectures were wonderfully laden with detail. He quoted a remark made by a colleague of Frost's to some disgruntled students: “I know it's [Frost's lecture style] not very good, but just listen to what the man is saying!”

Further, he was the first to theorize that, as an infection spreads and increases in a population, its progress is slowed not only by the resulting decrease in susceptible persons due to immunizations but also by deaths in the host population. And, in 1933, he came up with the concept of the “index case.”

And Frost, said Dr. Daniel, the former director of Case Western's Center for International Health, was also known from time to time to serve up rubber hot dogs to new Epi students coming to dinner at his home for the first time. 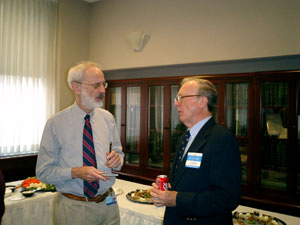 Frost was born in 1880 in Marshall, Va., the seventh of eight children, and was known to townsfolk as a clever and dreamy lad, always full of fun and mischief, with a marvelous sense of humor and a voracious appetite for books (his favorite was Pilgrim's Progress).

After graduating from medical school, said Dr. Daniel, Frost sought out clinical experience at New York's Belleview Hospital. After his internship in Richmond, he joined the Public Health Service and in 1906 was sent to stamp out mosquitos in and around New Orleans, where a yellow fever outbreak was brewing.

Frost and his fellow germ fighters aborted that scourge—the last yellow fever outbreak in the United States—and his efforts were noticed: A year later, he was called to the National Public Health Laboratory, the forerunner of the National Institutes of Health. There, he began focusing on polio and discovered that children could be infected with the virus but remain asymptomatic.

Frost also distinguished himself during the great influenza pandemic of 1918 when he was the first to notice an unusual mortality pattern: Unlike most flu epidemics, the 1918 flu did not kill mainly infants and senior citizens; instead, young adults were the principal victims. This pattern has been seen in only two other influenza outbreaks in recent history: the Russian flu of 1889 and the Asian flu of 1957.

At the end of the 1918 pandemic, Frost was invited by William Henry Welch to join the faculty at the new School of Hygiene and Public Health in Baltimore. When Welch asked what he'd need to set up a brand-new Department of Epidemiology, Frost turned in the following wish list:

The Epidemiology Department was given three rooms in McCoy Hall, on Monument Street, in which to house the new personnel. The curriculum comprised 20 to 30 lectures on principles and methods, raw-data analyses for the students to perform, field work and reports on assigned topics.

In 1931, Frost became the dean of the School of Public Health. Dr. Daniels discovered that the new dean soon discovered he could no longer get any work done at his office, and so he went home and worked with his students on the porch, usually knocking off at 5 p.m. for martinis.

Late in his career, Frost began to study tuberculosis (two of his siblings had died from it and he himself had been forced to take a six-month TB cure in 1917) and he supervised numerous TB studies in the Eastern Health District. (Although Frost performed all the statistical analyses for these studies, he characteristically almost never allowed his name to appear among the manuscripts' authors.)

Dr. Daniel ended by telling how, when Frost died in 1938 one day after he was awarded the Sedgewick Medal, the lead editorial in the Baltimore Sun referred to his “fine and rare spirit.” —Rod Graham