Responsible for the health of 8.1 million citizens of New York, the world’s fifth largest metropolitan area, Frieden manages 6,000 employees and has learned a few things about public health, especially in the urban environment. 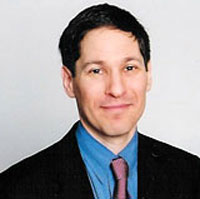 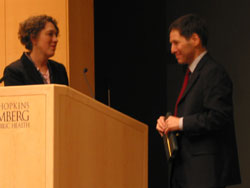 He is grateful for academia’s research, which demonstrates the interventions that really work and convinces people of public health's importance, but Frieden also has a wish list of other skills that students should acquire during their public health schooling.

Students, says Frieden, need more practical training in collecting, managing and analyzing data; improved writing and self-learning skills; the ability to turn out a one-page policy brief on a given topic in two hours; and a respect and appreciation for the day-to-day outreach work that is the bread and butter of public health.

Relying on these and other skills, Frieden’s employees in the Department of Health and Mental Hygiene have scored some notable successes against the city’s formidable public health challenges.

According to Frieden, besides the usual suspects—tobacco, alcohol, bad food and inadequate health care—several lesser-known culprits are also harming the health of New Yorkers.

“Most people in the city,” he said, “are partially or fully unaware of their health status. Eighty-nine percent of diabetics in our city, for instance, don't know their blood-sugar levels.”

Frieden then noted that health departments have traditionally been the victim of their own success, and he read from John Duffy's classic A History of Public Health in New York City 1866-1966 (New York: Russell Sage Foundation, 1974): "Encountering apathy, ignorance and avarice is the lot of all conscientious health officers. As preventive measures in the health area are more successful, the public is less inclined to support the programs which ensure this success." Frieden observed that although people will gladly give to the hospital that performed their heart catheterization, they would never think to contribute something to public health work that prevented their heart attack.

Then there's the active dislike of public health. Observing that “vocal minorities and vested interests dislike our initiatives much more than the vast majority like them,” Frieden listed some public health initiatives that supposedly go too far or are too intrusive—the smoking ban, mosquito spraying, condom distribution, restaurant inspections—and, next, some programs that supposedly have not been pushed hard enough—lead paint laws, rat extermination, daycare inspections.

Frieden also cited an organizational peculiarity of most big-city public health operations, one that stymies grand, overall improvement schemes: the fact that programs such as tuberculosis surveillance, mental health services and dog licensing are decentralized and so different from one another.

For every stumbling block, however, Frieden could name a strong accomplishment.

Colonoscopies. “Colon cancer is one of the most preventable cancers,” he said, “but it kills more nonsmokers than any other. With early detection, there's a 90 percent survival rate and we are now screening 10,000 more New Yorkers per year.”

Smoking. Frieden's department issues 60,000 death certificates a year in the city, 10,000 of which are directly attributable to smoking. “This [smoking] is the elephant in the living room,” he said, and he is unapologetic for the city's strict non-smoking initiatives, which have helped an additional 130,000 New Yorkers stop smoking.

Monitoring and surveillance. Public health staff monitor 60,000 “health events” each day in order to spot anything unexpected or out of the ordinary. Thus, the New York City Health Department was able to document not only the onset of flu season, but also that,when replacement-patch sales increased dramatically after the higher cigarette taxes went into effect, cigarette tax hikes cut the number of smokers.

“I tell people that the pay is low but in recompense the hours are very long. And yet, morale is very high,” says Frieden of his staff. “Our employees stay because they know they're making a difference.” —Rod Graham