Treatment with Mectizan prevents river blindness for many women and children in Africa and Latin America. 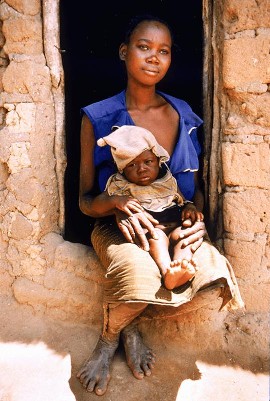 The development of the drug Mectizan (ivermectin) and its distribution worldwide have radically altered the consequences of onchocerciasis, or river blindness, which once blinded millions in Africa, and Latin America. Researchers at the Johns Hopkins Bloomberg School of Public Health conducted four new studies evaluating the Mectizan Donation Program, which was established by Merck and Co. Inc., the makers of Mectizan. They concluded that the now 17-year old Mectizan Donation Program is a successful and cost effective program for preventing the debilitating effects of river blindness. The researchers also believe that the public-private partnership forged by Merck through the Mectizan Donation Program should serve as a model for other companies and aid organizations seeking to prevent and treat other illnesses worldwide, such as AIDS and malaria. The studies are published in the current issue the journal Tropical Medicine and International Health.

“The Mectizan Donation Program is really one of the great public health success stories. It is the benchmark for all other disease prevention efforts in the developing world,” said Gilbert Burnham, MD, one of the study authors and an associate professor in the School’s Department of International Health.

Ivermectin, the compound from which Mectizan is derived, was originally found to be effective against parasites in farm animals. Realizing its potential as a human medicine, Merck and WHO conducted seven years of clinical trials which demonstrated that Mectizan is safe for humans and effectively kills the juvenile form of Onchocerca volvulus. These parasites cause blinding eye lesions and the debilitating skin conditions associated with river blindness. In 1987, Merck formed the Mectizan Donation Program to oversee the donation of the drug to organizations and agencies who would deliver the medication directly to the people in need of treatment. The program continued to grow throughout the 1990s through a partnership involving the World Bank, WHO, Ministries of Health, local communities and non-governmental organizations.

According to the study co-authored by David Peters, MD, MPH, DrPH, assistant professor of International Health at the School of Public Health, the 25 partners of the Mectizan Donation Program believe that the perceived benefits of the partnership far outweigh the challenges, and that the direct costs to the organizations have been minimal. The partnership also is rated highly on many aspects of governance and management, with relatively few problems identified.

“One of the real keys to the success the Mectizan Donation Program is the public-private-partnerships on the international, national and local levels. These partnerships created a great deal of interest and involvement at the community level so that the people who needed the medication were receiving it,” said Dr. Burnham.

In his study, Dr. Burnham noted that the number of annual Mectizan treatments approved through community-based, mass treatment grew from 255,000 in 1988 to nearly 50 million by 2002. The program continues to grow, with a projected 90 million people in need receiving treatment by 2010.

“The Delivery of Ivermectin (Mectizan)” was written by Gilbert Burnham and T. Mebrahtu.

“Mectizan Donation Program: Evaluation of a Public-Private Partnership” was written by David Peters and Traci Phillips

“Impact of Ivermectin on Illness and Disability Associated with Onchocerciasis” was written by James Tielsch and Arlyn Beeche.