The American Lung Association of the City of New York honored Mayor Michael Bloomberg for his contributions to improving lung health through the passage of New York City’s Smoke Free Workplace Law and his continued devotion to public health. The Johns Hopkins Bloomberg School of Public Health was renamed in Mr. Bloomberg’s honor in April 2001. 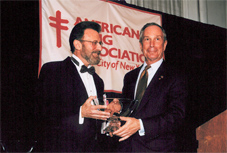 Founded in 1902, the American Lung Association of the City of New York is a non-profit health organization dedicated to the fight against lung diseases such as asthma, emphysema, lung cancer and pneumonia, which it notes are the third leading cause of death in the United States.—Tim Parsons