New analysis reveals the widespread public health consequences of the Venezuelan economic crisis and the erosion of the country’s health-care infrastructure. In a new review of evidence, researchers document the steep and steady increases in infant and maternal morality and infectious diseases rates over the past decade. And they call on the Venezuelan government to coordinate a humanitarian response to a crisis that is spreading beyond the country’s borders. 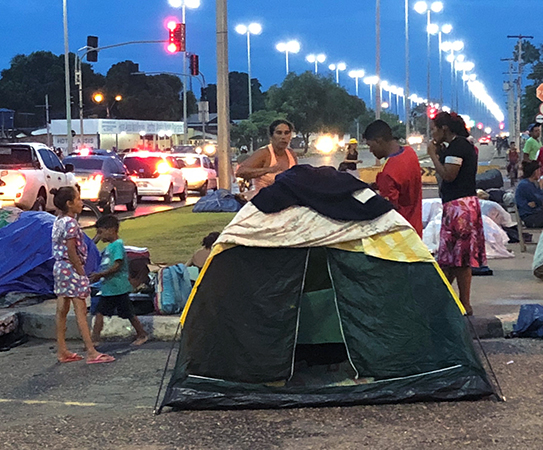 The government of Venezuela stopped publishing national health statistics in 2016, making assessment of the country’s health situation difficult. The research team, therefore, collected and synthesized available data from 2002 through December 1, 2018, to create a comprehensive and more up-to-date picture of the humanitarian health crisis in the country.

In recent years, Venezuela’s health care system has been plagued by widespread shortages of medicines, lack of water, and basic health products. Significant emigration of health care personnel and deterioration of infrastructure have further weakened the ability to address the population’s health needs.

“Our analysis exposes the widespread collapse of the public health infrastructure in Venezuela, which has been occurring for the past 7 to 8 years,” explains Shannon Doocy, PhD, one of the article’s lead authors and an associate professor in the Department of International Health at the Johns Hopkins Bloomberg School of Public Health. “With few medical supplies or health care providers left in the country, patients can’t find adequate care. To make matters worse, preventive public health efforts, such as vaccinations and mosquito control have dramatically declined, leading to a rapid rise in infectious diseases.”

Key findings from the researchers’ analysis include

Researchers also traveled to Colombia’s and Brazil’s borders with Venezuela to interview health administrators and practitioners. What they found were severely strained health systems nearly buckling under the demands of growing migrant populations. In Colombia, which had already received over 1 million Venezuelan migrants by the middle of 2018, demand for services was causing unprecedented strain on the health system in border areas where migrants are concentrated. Emergency medical care for Venezuelan migrants is provided for free and Colombian public hospitals are incurring large amounts of debt as they struggled to meet demand for services. Treatment for non-life-threatening illnesses and chronic medical conditions, which is not provided for free at government health facilities, remains out of reach for many Venezuelans residing there.

In Colombia, care for Venezuelan migrants has been limited to emergency care. Treatment for chronic and non-life-threatening illnesses remains out of reach for most Venezuelans residing there.

Brazil’s border area is remote and lacks economic resources. The health system and providers were already stretched thin. Venezuelan migrants were presenting with serious illnesses, such as advanced cancer and HIV, that had been left untreated in Venezuela. In the first 6 months of 2018 alone, there were more TB cases among Venezuelans in the region than all of 2013 to 2017 combined. A measles outbreak that could also be traced to Venezuela had infected over 10,000 people in Brazil in 2018; whereas there had been no infections for at least 2 years. The number of Venezuelans being treated for HIV in Brazil also tripled from 2013 to 2018. The article presents a stark picture for Venezuela, and its closest neighbors, that could take decades to repair. To reduce the health toll of the crisis and prevent further decline the authors urge immediate action on the part of the Venezuelan government and international agencies. Specifically:

“The dire health situation revealed by our analysis likely underestimates its true extent. The Venezuelan government has suppressed the release of public health data since 2016 and the economic and political crisis has worsened since then,” says Kathleen Page, MD, the other lead author of the paper and an associate professor at the Johns Hopkins School of Medicine.  “The Venezuelan government should immediately acknowledge the public health crisis in the country and engage with the international community to facilitate an appropriately scaled response without delay.”

For more about the humanitarian crisis in Venezuela
The crisis in Venezuela is multi-faced and extends beyond health. Hyperinflation and declining food availability are contributing to the development of a food and nutrition emergency. While official data is largely unavailable, information from a variety of sources suggests that nearly the entire population is food insecure and that acute malnutrition among children is reaching crisis levels in vulnerable populations. Hospitals across the country report increases in acute malnutrition admissions and deaths. There is an urgent need for widespread food assistance and treatment for children with acute malnutrition. To learn more, you can read a recent study by Bloomberg School researchers here.