As a child growing up in small towns in the western Indian state of Maharashtra, Shrikar Pardeshi dreaded visiting his maternal grandmother in her rural home. With no toilets, he had to trek out to the fields to defecate. However, having to see his elderly grandmother make far longer treks was even more troubling, he says.

“That was something really difficult for me to understand. I finally persuaded my grandmother to build a toilet,” Pardeshi remembers.

“I know that I can carry my grandmother’s dream forward by ushering in transformational change.”

As a public servant for the past 19 years, Pardeshi has devoted much of his career to community-led initiatives in sanitation, water, and education. While serving at the Prime Minister’s Office (PMO) from 2015 to 2020, he was part of the team that implemented the Swachh Bharat Mission, the world’s biggest sanitation campaign in which over 100 million toilets were built. At PMO, Shrikar contributed to policy formulation, program design, and monitoring implementation of national initiatives in public health, gender justice, rural development, and agriculture.

In his MPH program, Pardeshi is focusing on health systems and policy, an area that will help him continue to excel as a civil servant improving public health in India.

“I know that I can carry my grandmother’s dream forward by ushering in transformational change,” he says. 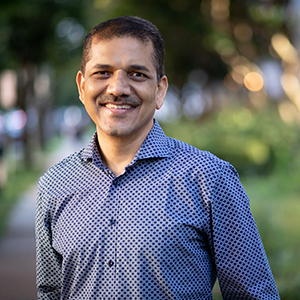