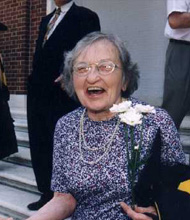 Dr. Helen Abbey, Professor of Biostatistics at the Johns Hopkins Bloomberg School of Public Health for over 50 years and one of the School's most beloved faculty members, died March 4, 2001. With appointments in the School of Public Health's Departments of Biostatistics, Epidemiology, and Population and Family Health Sciences, and in the Departments of Medicine and Ophthalmology at the Hopkins School of Medicine, Dr. Abbey's influence on generations of scientists is pervasive.

Her research focused on the design and statistical analysis of epidemiologic and genetic studies of human disease. She investigated the effects of low-level radiation on morbidity and mortality, and the natural history of enteric infections in the American Indian population. As late as 1998, she was co-authoring scientific papers that appeared in peer-reviewed journals.

Born September 1, 1915, in Ann Arbor, Michigan, Helen Abbey received an MA degree in mathematics at the University of Michigan in 1942. After working several years as a statistician for the Michigan Department of Health, she joined the faculty at the Johns Hopkins School of Public Health in 1946 as a research assistant in Biostatistics.

At that time, the School consisted of a single building on Wolfe Street. Reminiscing later, Dr. Abbey wrote, "The [Wolfe Street building's] doors were locked at 10:00 p.m. but most people seemed to have keys. These were needed because students came in nights and Sundays to feed their animals or check up on their experiments. It was rumored that I came in to feed my calculator."

Dr. Abbey earned her Doctorate of Science degree in Biostatistics in 1951 at the School, where she had unparalleled role models in teaching -- Dr. Lowell Reed, who became the seventh president of Johns Hopkins University, and Dr. Margaret Merrell, a distinguished professor of Biostatistics. Dr. Abbey matured into the quintessential teacher and mentor. During her tenure at the School, Dr. Abbey instructed over 4,000 students in Biostatistics and was an advisor and thesis reader to over 700 doctoral candidates. Among her students were ministers of health, directors of hospitals, university professors and health experts throughout industry and government. She taught two Lasker Award winners, Dr. Victor McKusick, Professor of Medical Genetics at Johns Hopkins University, and Dr. Alfred Sommer, Dean Emeritus of the School of Hygiene and Public Health at Johns Hopkins.

Scott Zeger, Vice Provost for Research and former Chair of Biostatistics (1996 - 2008) said: "Dr. Abbey advanced health by training leaders from across the globe to use quantitative information more effectively. She did so with love so that every one of her students achieved their full potential."

Dr. Abbey had taught the School of Public Health's Dean Emeritus, Dr. Alfred Sommer, when he was earning his Masters of Health Sciences degree in the 1970s, and she was never afraid thereafter to treat him as a former pupil. Of Dr. Abbey, Dean Sommer said, ""She was the quintessential teacher and mentor -- I knew this firsthand, as her student in the early 70s. And I felt this keenly when she accompanied me to Beijing in 1983 to co-teach a course on epidemiology and statistics to their leading academic ophthalmologists: She gravitated to the students, they flocked to her, and she insisted on informing every visiting dignitary that "the Dean was my student." I was, and am, better for it."

Because of this enduring concern for students, an endowed fund was created in Dr. Abbey's honor at the Hopkins School of Public Health. The Helen Abbey Fund provides support for doctoral candidates in Biostatistics who have made a commitment to teaching and who serve as teaching assistants in introductory classes, thereby continuing Dr. Abbey's legacy.