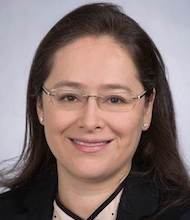 Paula Aristizabal is a pediatric hematologist/oncologist at Rady Children's Hospital-San Diego and an assistant professor of pediatrics in the Division of Pediatric Hematology/Oncology at University of California San Diego (UC San Diego).

Her long-term career goal, as a Hispanic pediatric oncologist who serves a large Hispanic population in Southern California, is to develop an independent research career as a physician-scientist focused on reducing survival disparities in Hispanic children with cancer. Paula completed her fellowship in pediatric hematology and oncology at UC San Diego, a Master of Advanced Studies in Clinical Research at UC San Diego and a certificate in pediatric bioethics at the University of Missouri. She joined the faculty at UC San Diego in 2015 and serves as the liaison between Rady Children's Hospital and the UC San Diego Moores Cancer Center, one of 41 National Cancer Institute-designated Comprehensive Cancer Centers in the US. Her research has focused on the barriers experienced by Hispanic children to participate in clinical trials for treatment of cancer and how contextual factors such as race/ethnicity, socio-economic status, health literacy, language and acculturation affect outcomes in Hispanic children with cancer. She has also worked in implementation of health services for children with cancer in underserved areas in Latin-America, including Mexico and Colombia. Paula Aristizabal is currently the principal investigator of an NCI-funded Mentored Clinical Scientist Research Career Development Award to Promote Faculty Diversity in  Biomedical Research (K08), Implementation of a Navigation Intervention to Improve Research Literacy and Diversity in Pediatric Leukemia Clinical Trials. She  has also received research grant funding from various organizations including from the American Cancer Society, the American Society of Hematology, the Alex Lemonade Stand Foundation, the American Society of Pediatric Hematology/Oncology, Padres Pedal the Cause, and Hyundai Hope on Wheels. She publishes her work in peer-reviewed journals and presents her work at both national and international meetings. Among her honors and accomplishments, she received the Mitchell Thorp Foundation "Pillars of Hope" Award (2018), the UC San Diego Hispanic Center of Excellence Scholar Award (2018), the American Society of Pediatric Hematology/Oncology Clinician-Educator Award (2016), the American Society of Hematology Scholar Award (2016), the University of California Office of the President "Team Science" Scholar Award (2015) and the Rice University-Puentes Consortium Scholar Award (2015).